Caption Literature
An Unusual Northern British Library Centre Table with a Parrot Coal Slab Top
The walnut base with lyre shaped end supports, the fluted legs terminating in carved acanthus leaves. The platform base in figured walnut, a drawer to the fitted edge, on original ceramic castors. The whole made to support a large octagonal parrot coal polished slab top with a fine black patina
Circa 1850 – 60
Size: 105cm wide, 63cm deep, 77cm high - 41¼ ins wide, 24¾ ins deep, 30¼ ins high
Coal top: 99cm wide, 58cm deep, 5.5cm high – 39 ins wide, 23 ins deep, 2¼ ins high
cf: Kirkcaldy Museum, Fife, Scotland; two chairs and a table carved from parrot coal by Thomas Williamson (1817 – 60) for Wemyss Castle in 1855
Parrot coal is a form of anthracite and is said to burn with a crackling noise similar to the clicking of a parrot’s beak. Unlike brittle household coal it has a glassy texture and quality like that of marble and so was sometimes carved into furniture and objects during the mid 19th century.
Anthracite is the highest-ranking form of coal and differs from other coals because of its extremely high content of carbon with a correspondingly low proportion of volatile matter. It is cleaner to handle than bituminous coal and ignites at a much higher temperature.
Thomas Williamson, a stonemason from west Wemyss is the only known maker of parrot coal furniture as he signed and dated some of his pieces (now in the Kirkcaldy Museum). He worked under the patronage of the Wemyss family who were both coal pit owners and landowners. However other 19th century mine owners must also have commissioned pieces from their estate cabinetmakers and this unusual library table is an example of their craft. 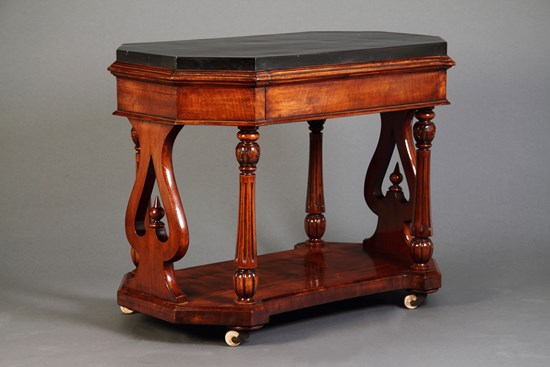 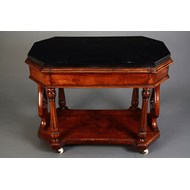 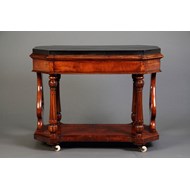