Caption Literature
A Sailor’s Naí¯ve Oil on Canvas Sail Cloth of a Three Masted Whaler in Full Sail off the Coast of Newfoundland
Flying an American flag amidst a school of spouting sperm whales. Three whaling boats each with six men in the foreground
Mid to late 19th Century
Size: 33cm high, 46cm wide – 13 ins high, 18 ins wide
These small sailor’s marine studies painted on sailcloth were once intended to go inside the lid of a seaman’s chest. Tradition prescribed that inside the lid of the trunk there should be a picture of a ship, but brushes and oil paint were not as easily managed as scrimshaw and carving by the crude and chapped hands of the mariner. The brushes were coarse and the typical limited palette of four or five primary colours dictated a necessary naí¯vety of style. The important object was to depict the sails swelling in the wind, to put in all the details of the hull, and for the whaler to show the hunt.
With no thin brush, the rigging was often drawn in pencil with a ruler and then crudely filled in more or less with black oil paint with a split reed or nail. The canvas had the disadvantage of cockling when the paint dried so they would be quickly nailed to the lid of the chest or to a mount. Often the sailors’ heirs would break up the old sea chests, but save the paintings which once lived inside the lids and try to preserve them as best they could. 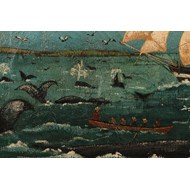 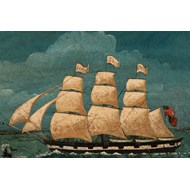 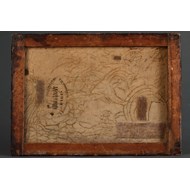 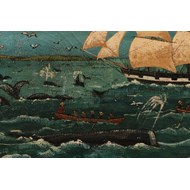 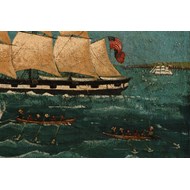