Caption Literature
A Superb and Rare Cased Collection of Forty Australian Birds of the Parrot Family ‘Psittaciformes’
Including cockatoos, lorikeets and parakeets by the taxidermist T.M. Williams. An old label to the inside reading ‘T.M. Williams 155 Oxford St. Nearly Facing Bond St. Artist. 8 years at the Zoological Gallery’
Thomas Mutlow Williams employed Henry Ward, Father of Rowland Ward, as his ‘Chief Artist in Taxidermy’ and was one of 12 British taxidermists to exhibit at the Great Exhibition of 1851. He is listed in trade directories as being at 155 Oxford Street from 1845-56
Circa 1845-1856
Size: 112cm high, 37cm deep, 80cm wide – 44 ins high, 14½ ins deep, 31½ ins wide
Interest in the different species of these brightly coloured birds, which were considered magical and were venerated as divine messengers in ancient cultures, dates back to at least 400BC. Parrots at that time were described as being raised at the Persian court and trained to speak different languages. The civilisations of the Mediterranean and the ancient empires of Central and South America shared a common interest in the astonishing abilities of parrots. After the Asian conquests of Alexander the Great (356-323BC), the spread of Indian parakeets began across ancient Greece and beyond. Pliny the Elder (AD23-79) writes of both the Indian and African parrots known at that time and recounts the harsh methods used by professional trainers to teach them how to speak and sing in their patrician master’s homes. The high cries of parakeets would echo in the Imperial palaces ‘Ave Caesar’! Highly sought after parrots and parakeets could easily cost more than a young strong slave. They were kept in precious cages inlaid in ivory and mother of pearl and would be induced to make and reproduce in captivity.
From the Middle Ages to the Renaissance parrots are often associated in paintings with the Virgin Mary and the Christ Child, and those species imported into Europe by merchants and travellers became one of the most privileged premonitory symbols of Christ’s passion. Numerous legends recount stories of talking parrots raised at the courts of princes and cardinals able to recite prayers, predict imminent peril and reveal the deceit of lions to their masters. Henry VIII owned one such parrot, a famous African Grey.
Rare and costly objects of aristocratic collectors across Europe, symbols of sacred meditation or exotic lust and sensual love, parrots were faithfully depicted alongside their masters in highly symbolic paintings. But by the end of the 16th century parrots gradually lost their sacred connotations and were slowly transformed into the rare and fascinating trophies of the finest and most precious naturalist collections. At the dawn of ornithological science parrots were the passionate subjects of new comparative science.
No other avian group has contributed so many species as companions to man. Parrots’ intelligence, affectionate dispositions, promoted by their communal living in the wild, and their ability to imitate human speech has made them valued domestic companions. Large parrots can be very long lived and cockatoos can live up to 120 years. As late as 2002 an old parrot that once belonged to Winston Churchill still knew and imitated that curses the great man uttered in the 1940’s.
A part list of the forty cased Australian birds by T.M. Williams
1.
A fine specimen of Leadbeater’s cockatoo ‘Cocatua Leadbeateri’ with a full and large vivid salmon pink and white crest. Also known as Major Mitchell’s cockatoo in Australia
2.
A specimen of Swainson’s Blue Mountain Lorikeet ‘Trichoglossus Haematodus Moloccanus’ also known as the Rainbow Lorikeet
3.
A specimen of the Red Collared Lorikeet ‘Trichoglossus Haematodus Rubritorquis’ from Northern Australia sometimes called the Orange Naped Lorikeet
4.
A specimen of the Red Crowned or Varied Lorikeet ‘Trichoglossus Versicolor’ from Northern Australia
5.
A specimen of the Musk Lorikeet ‘Glossopsitta Concinna’ a native of Eastern and Southeastern Australia, Tasmania and Kangaroo Island
6.
A specimen of the Purple Crowned Lorikeet ‘Glossopsitta Porphyrocephala’ from Southern Australia
7.
A specimen of the little lorikeet ‘Glossopsitta Pusilla’ from Tasmania and Southeastern Australia
8.
A specimen of Marshall’s lorilet ‘Opopsitta Diophtalma Aruensis’ from Northern Queensland
9.
A specimen of the Blue Faced Lorilet ‘Opopsitta Diophthalma Macleayana’ sometimes known as Leadbeater’s Lorilet also from Northern Queensland
10.
A specimen of the Red Faced Lorilet ‘Opopsitta Diophthalma Coxeni’ native to Southern Queensland and Northern New South Wales
11.
A specimen of the Swift Parakeet ‘Lathamus Discolor’ also known as the Swift Lorikeet native to Southern Queensland
12.
A specimen of the Australian Barraband Parakeet ‘Polytelis Swainsonii’ also known as the Superb Parrot
13.
A specimen of the Rock Pebbler Parakeet ‘Polytelis Anthopeplus’ from Southern Australia
14.
A specimen of the Yellow Cosella ‘Platycerus Flaveolus’ found in the Murray River area of Southern Australia
15.
A specimen of the Stanley or Western Rossella ‘Platycerus Icterotis’ a rare bird from Southwestern Australia
16.
A specimen of the Blue Rosella ‘Platycerus Venustus’ from the Northern Territory and Melville Island
17.
A specimen of the Australian Grass Parakeet ‘Melopsittacus Undulatus’ also known as the Budgerigar, now the most popular pet bird in the world 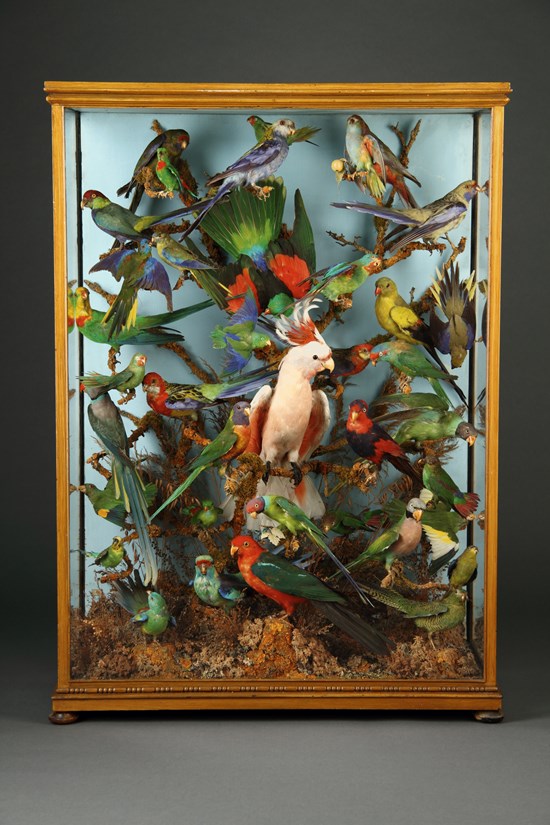 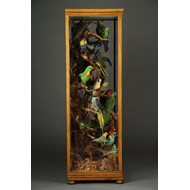 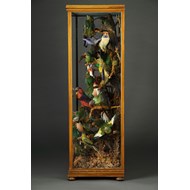 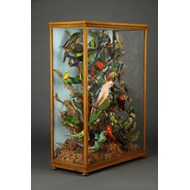 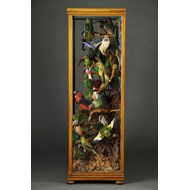 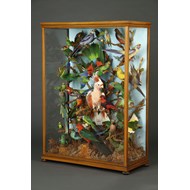