Caption Literature
A Tibetan Gilt Copper Mask Appliqué of a Grinning Toothy Human Skull
Probably used by a Monastic dancer or from a skull crested club or standard
Late 18th – Early 19th century
Size: 13.5cm high, 10cm wide, 4cm deep – 5¼ ins high, 4 ins wide, 1½ ins deep
Dancing is a universal shamanic way of linking with the spirit world and in some Tibetan monasteries the monks still perform dances, which preserve elements of the nature-spirit religion of pre Buddhist times. They wear masks and costumes taking on the spirits embodied in the masks by reciting incantations.
Yama, the Lord of death whose nature is ceaseless disappearance and change holds a skull crested club, and is represented in a seasonal monastic ceremony as the male energy of death that is present in all things. The thunderbolt standard topped with a skeleton mask is held aloft by the dancing attendants of Yama called ‘Chiti Patis’ who are frightening skeleton beings, the Lords of the Funeral Pyre.
The human skeleton and skull are one of the unique features of Tibetan art and play a positive role in Buddhist belief. It is studied and contemplated and its potential realised and learnt in order to move forward. 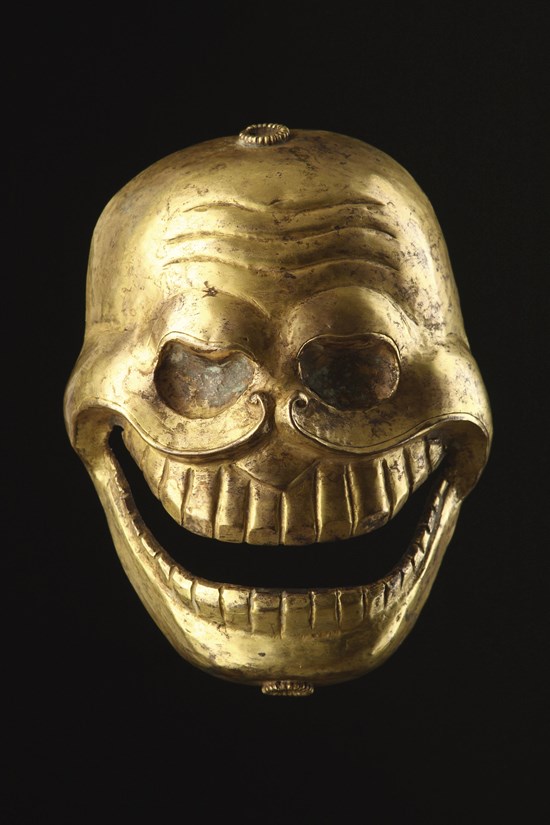 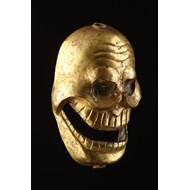