Caption Literature
An Unusual Set of Twenty-Five Apothecary’s Naturalistically Painted Plaster Display Models of Fungi
Mounted on wood bases with a paper label giving the Latin name for each variety
Probably French
Circa 1900
Size: 19cm high, 7½ ins high (max) 3.5cm high, 1½ ins high (min)
8cm x 8cm square – 3¼ x 3¼ ins square (bases)
Mushrooms and other large varieties of fungi have been eaten since earliest times as traces of puffballs in the prehistoric lake dwellings of Switzerland, Germany and Austria show. The rarest and finest mushrooms such as the truffle were highly esteemed in classical Greece and Rome and have always been expensive. Growing wild in most parts of the world mushrooms have formed part of the diet of most peoples being eagerly gathered in most countries where they occur. However, the British, Dutch and most Arabs are exceptions and this tendency is even more noticeable in Ireland where large crops of precious morels go un-harvested.
The knowledge that some fungi are highly poisonous accompanied by a vague impression that there is no sure way to tell safe ones apart from the dangerous probably accounts for the persistence of these negative feelings. Their ephemeral nature and apparent lack of roots also lend credence to the idea that they are ‘unnatural’ and gives rise to a fear of the supernatural at work.
However, in contrast the French and other Europeans all gather wild mushrooms with great enthusiasm thronging the woods every autumn. These models would have been displayed in an apothecary’s shop window during the season so that the local populace could compare their harvest and positively identify the variety of their finds. 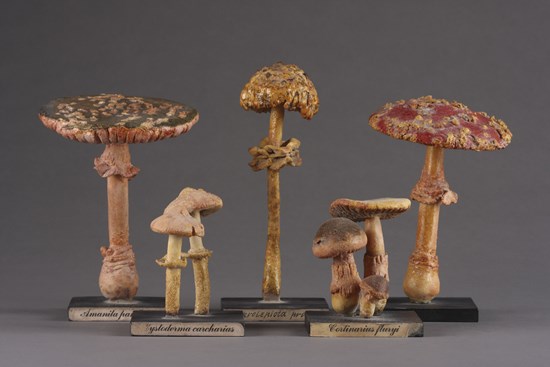 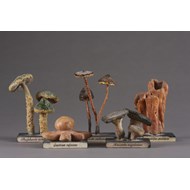 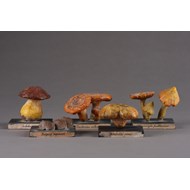 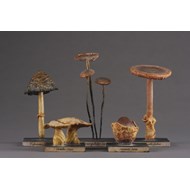 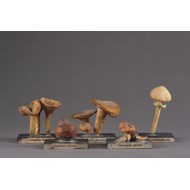