Caption Literature
An Interesting and Large Ancient Egyptian Blue Glazed Faience Image of the Dwarf God Bes
For use as a Prophylactic charm, a fragment of a larger sculpture perhaps a sceptre the back glazed showing his long lions mane
Third Intermediate period to Late period, 21st to 25th Dynasty 1070 – 712 BC
Size: 8cm high, 7cm wide, 2cm deep – 3¼ ins high, 2¾ ins wide, ¾ ins deep
The ancient Egyptian dwarf god Bes was often shown with the ears and mane of a lion or wearing a lion skin cape whilst otherwise naked and sticking out his tongue. He was considered capable of warding off snakes from the house and despite his apparent ferocity he was a beneficial deity favoured as a protector of the family and particularly as a guardian of infants and new mothers.
Although this was a flat two-dimensional object this representation of the god Bes can be viewed from both sides and each is decorated in relief. Bes would have been wearing a headdress of five plumes. With his right hand he is offering an oval shaped object as nourishment to the infant god Horus who he cradles in his left arm. This object probably served as the terminal of a prophylactic charm that would have been fixed into a short papyriform sceptre, much like the disc of a mirror is attached to a handle. 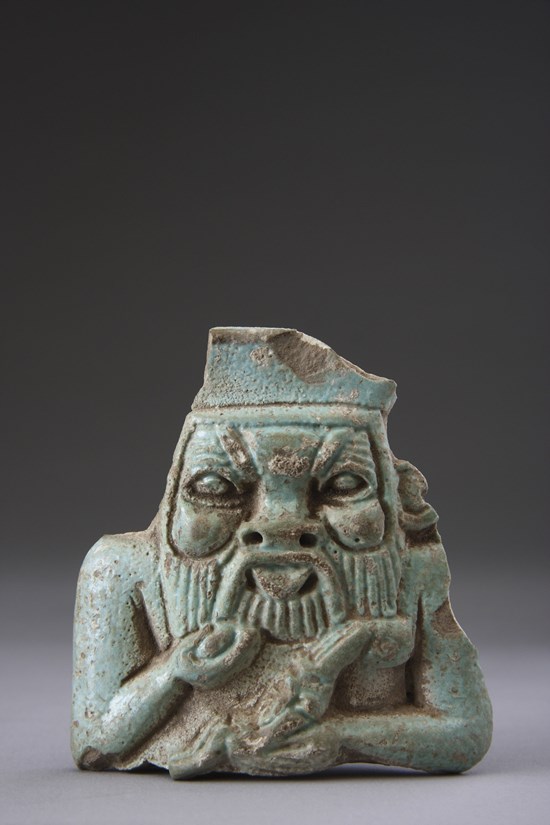 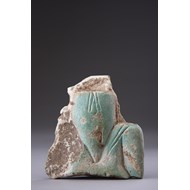