Caption Literature Exhibition
Italian Large Porphyry, Rosso Antico and Green Verde Antico stand for a library bust or sculpture
Late 18th – early 19th Century
Size: 26.5cm square, 9cm high – 10½ ins square, 3½ ins high
22cm dia. 3cm high – 8½ ins dia. 1¼ ins high (Porphyry)
Porphyry is a hard volcanic deep purple red rock with a peppering of tiny white crystals of feldspar. The word comes from the Latin 'porpora' meaning purple and was first used to describe Egyptian Imperial porphyry. Quarried by slaves and convicts in the dry heat of the desert it has been prized by Kings, Popes and Emperors since ancient times.
After the quarries were abandoned and their location became forgotten it was extensively recycled by the 'Scalpellini' of Rome who cut it into thin pieces to use in the churches as inlays for altars and furniture and in their famous Cosmati pavements.
However, in 1823 the quarries were rediscovered by an English archaeologist John Gardener Wilkinson and in 1887, an intrepid marble hunter and merchant William Brindley, set off by camel in his footsteps to again find the quarries. At first he found little more than discarded pillars and boulders, but then he spotted a stain of purple on the mountain opposite and set off to explore...... ‘on arriving.... my delight knew no bounds the ground being strewn with pieces of the most sumptuous porphyry while a little farther on was the actual pitched way or slide some 15 foot wide down which the blocks came’. Interestingly it was Brindley who would later supply quantities of 'rosso antico' for a low screen and steps between the sanctuary and the Nave in Westminster Cathedral in London, said to be one of the best examples of its use in 20th Century architecture.
We are always interested in purchasing items of antique Porphyry, from ancient fragments / boulders to turned Porphyry specimens (columns / tazza / urns etc.) and Porphyry busts etc. 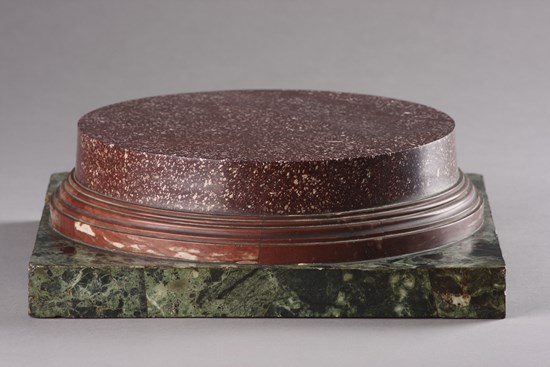 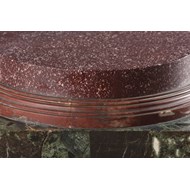