Caption Literature
A Fine Anglo Indian Solitaire Game
The 35 vase shaped pegs fitting into holes contained in the stained and carved ivory board mounted on bun feet
Circa 1820 – 30
Size: 11cm wide, 12.5cm deep, 5cm high – 4¼ ins wide, 5 ins deep, 2 ins high
Solitaire, a game for one, reached Britain from the continent in the 18th Century. It is played on a board with pegs or marbles, which can vary in number. Moves are made by 'jumping' and the peg, which is jumped over is then removed, with the object of the game being to leave the last one in the centre.
Chess had been invented in India around the 6th Century AD and in pre-Moghul India playing cards based on mythological themes were known. Originating in Persia, the game of backgammon was popular in India before the arrival of the British and was quickly adopted by them. The first colonials brought their own cards and games with them and bridge became and remains one of the most popular especially among the higher classes in India. Solitaire, however, was always a favourite indoor pursuit and pastime for one. 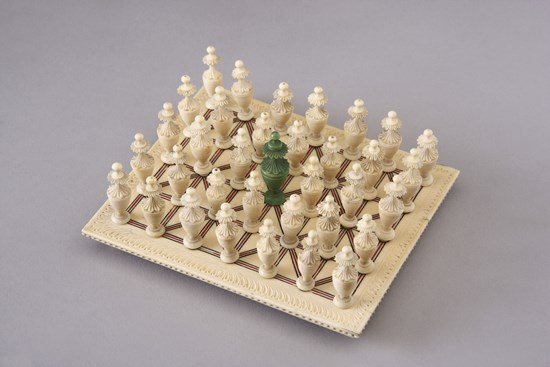 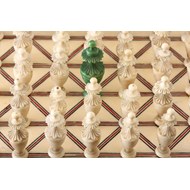 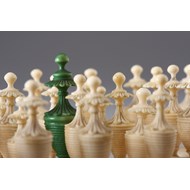