Caption Literature
A Fine Kisi Oyo State Yoruba Peoples Nigeria Carved Wooden Ibeji Male Twin Figure
The crested coiffure stained with reckitts blue. His face and body polished from libations with tukula powder wearing two necklaces of coloured glass beads
A label to the base reading: ‘Oyo Ibeji’
19th / Early 20th Century
Size: 27cm high – 10½ ins high
The Yoruba women of West Africa are four times more likely to give birth to twins than women anywhere else in the world. Subject to a much higher rate of mortality the twin figures or ‘Ibeji’ meaning ‘born two’, were carved as images and spiritual replacements of the twins who died. The images, carved by commissioned village sculptors, were placed in the living area of the house, ‘fed’ offerings of palm oil and beans and were washed and dressed regularly. Their bodies were rubbed all over with red camwood paste believed to have healing properties and magical powers. Their complex hairstyles were painted with indigo dye and washing blue, known as ‘Reckitts Blue’ and much used in the 19th century and early 20th century to whiten clothes in the weekly wash. These small sculptures, mostly carved between 1850 and 1950 have become the best known and most loved of all African art in Europe and America. 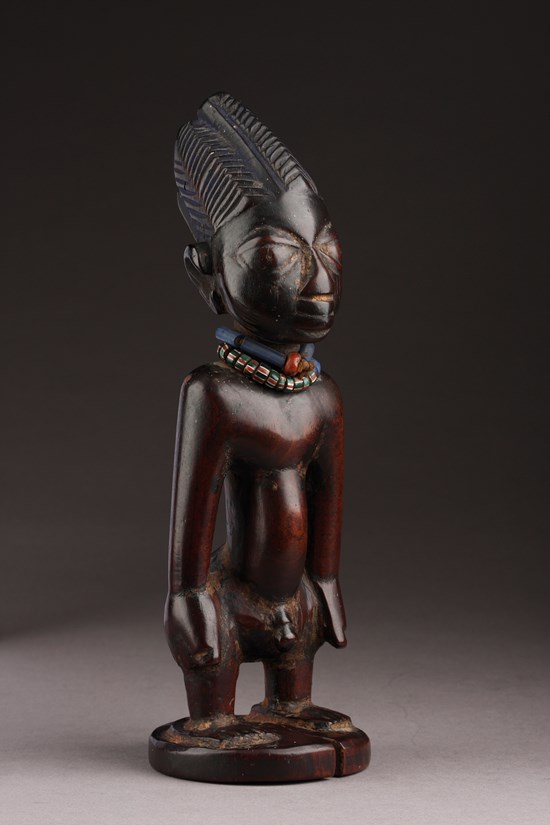 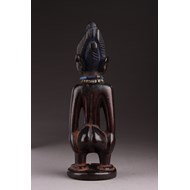 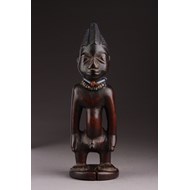 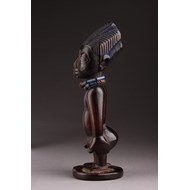