Caption Literature
A Fine South West Native American Pima Flat Bowl Shaped Basket
Decorated with thirteen abstract life forms
Willow and devils claw
19th Century
Size: 31cm dia. – 12¼ ins dia.
The Pima are generally believed to be descendants of the important prehistoric culture known as the Hohokam which produced villages with ball courts and extensive irrigation systems that sustained their agriculture in a desert environment. The Pimas call themselves ‘Akimal o’ohdam’ meaning river people to distinguish themselves from the Papago, the ‘Tonoho o’ohdam’, or desert people. The Papago land is a sandy rugged and nearly waterless desert. The Northern Pimas who lived along the Gila river Valley near Phoenix, had the best conditions as they had been able to draw upon the permanent flow of the river for their crops until the white settlers and the Army corps of Engineers diverted & pillaged the water so that Pima agriculture became impossible
The early Pimas who lived along the rivers had easy access to basket making materials such as willow, cattails and the hooked seedpods of devils claw. In the 19th century the Pimas of south western Arizona used baskets to transport everything from cactus fruits to household implements. Because they were practically impervious they were used as sinks for washing and to brew and hold saguaro cactus fruit wine for annual ritual events. The Pima used their baskets to mix dough for tortillas, prepare pimole and to parch and winnow wheat and grass seeds. The Pima basket was an essential part of everyday family and village life. 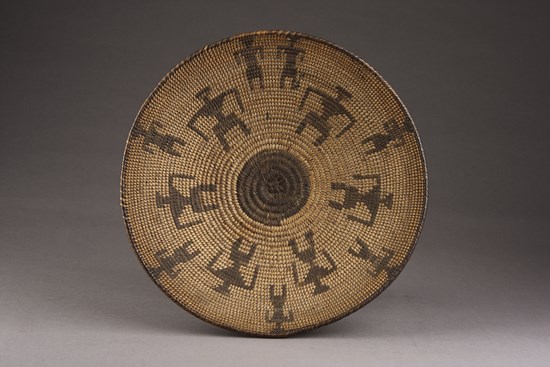 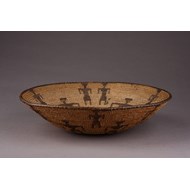