Caption Literature
An Interesting Cased Example of a Little Auk ‘Platus Alle’
A label to the Reverse in ink stating ‘Little Auk Picked up Dead After a Storm at Lower Woodford, Wilts. 1st December 1916’
Circa 1916
Size: 23.5cm high, 23.5cm wide, 12cm deep – 8¾ ins high, 8¾ ins wide, 4¾ ins deep
Related to the famously now extinct flightless Great Auk the twenty three remaining species of Alcid are the northern counterparts of the penguins of the Antarctic. The little Auk is the smallest of these measuring between 8 – 9 inches in length and lives in the North Atlantic and its arctic extensions from Greenland to Novaya Zemlya. It nests in the crevices and crannies of the rocky cliffs of far northern Jan Mayen Island, Spits Bergen & Franz Joseph land often at some distance from the sea. Its eggs & young are hidden from sight and remain in the nest for the 6 to 8 weeks it takes their flight feathers to develop and then they fly to sea unattended by their parents.
The Little Auk migrates southwards in winter along both the coasts of the Atlantic usually to the British Isles & New England, but occasionally as far as the Mediterranean and Florida. Sometimes it is driven ashore, like this example, by storms. They are fat little birds commonly called ‘Pineknots’ in New England and were once a favourite food of the Eskimos who would catch them in dip nets as the flocks wheeled by their nesting cliffs. 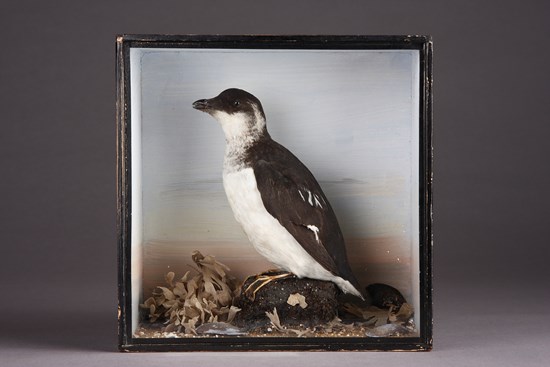 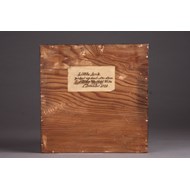 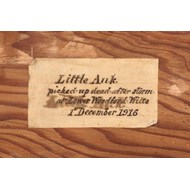 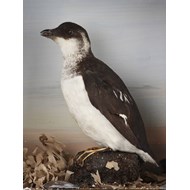