Caption Literature
A Fine French or English Inlaid Tortoiseshell Pocket Snuff Box Silver Piqué Posé with Mother of Pearl and Abalone Shell Appliqué Copper and Brass
Circa 1750-60
Size: 7cm dia. 3.5cm high – 2¾ ins dia. 1½ ins high
See Finch & Co catalogue no. 14, item no. 6, for an example of an Italian Piqué pose tortoiseshell casket
Tortoiseshell was used for making snuff boxes from the 17th century onwards. The material was sliced from the carapace of the hawksbill turtle, softened in boiling water, moulded and designs pressed into it. Many of the best tortoiseshell boxes were decorated with piqué work which consisted of a design in silver or gold inserted into the surface of the shell.
In the late 17th century four thousand refugee French Huguenot families settled in England, some of whom were distinguished piqué artists. They decorated many snuffboxes for their English customers during the 18th century in what was originally considered a ‘French style’. They later developed the use of mother-of pearl appliqué alongside piqué work creating picturesque arcadian scenes full of imagery on the lids of tortoiseshell snuffboxes. 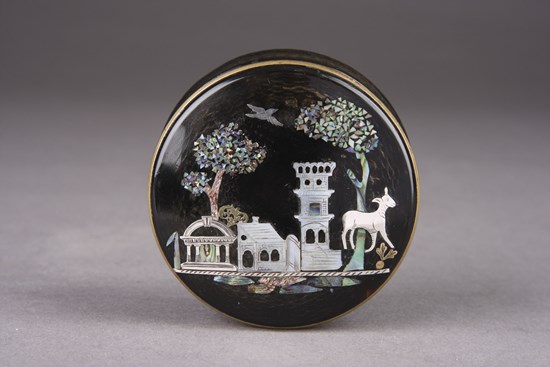 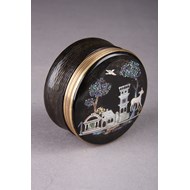