Caption Literature
An Interesting Chinese Silver Ceremonial Court Hat
Decorated with flowering tendrils, butterflies and projecting floral buttons the domed crown surmounted by a double knop
1st half 19th Century
Size: 17cm high, 19.5cm dia. – 6¾ ins high, 7¾ ins dia.
The Chinese had little need for western products and so early European traders were hard pressed to find a commodity, which could be used in trade other than silver. The Chinese did not accept foreign currency, which was most often Spanish trade dollars, on its face value but on its weight. All foreign currency was inspected, tested for its weight and approved with a stamp or ‘chop’. After numerous such transactions the currency became so badly defaced that it had to be melted down. This reduced coinage provided a big source of raw silver for the early 19th century Chinese silversmiths. 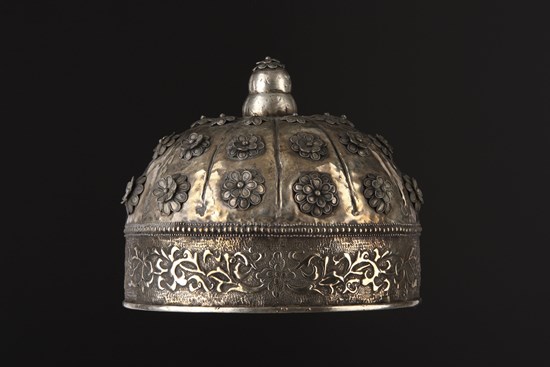