Magnificent and Rare Set of French Goldsmiths or Moneyers Scales

Caption Literature
A Magnificent and Rare Set of French Goldsmiths or Moneyers Scales
The cast silver figure of the swan holding a hook in its beak from which is suspended a steel double arm balance. The swan perched on top of a wooden obelisk mounted with silver gilt swags, lion masks and acanthus leaves. Set on a flamed mahogany box base with a single drawer containing the scales and original brass leaf weights. A button of brass inset to the box front automatically lifts the swan and thus the scales by means of a central rod. The whole set on four ivory bun feet
Circa 1760 – 1780
Size: 29cm high, 18.5cm wide, 9.5cm deep – 11½ ins high, 7¼ ins wide, 3¾ ins deep
This highly ornate, decorative and delicately made double arm beam balance consists of two pans suspended from a centrally pivoted beam. Weights of a known mass are placed on one pan and the substance or body to be weighed is placed on the other. When the beam is exactly horizontal the two masses are equal.
The balance has been known since antiquity and during the long history of its development it has been particularly associated with the assaying of precious metals, and it was the usefulness of the balance to jewelers, goldsmiths, moneyers and apothecaries that prompted its development. The mechanism of the equal arm balance was suitable for weighing very small amounts and the gold and silver alloy of bullion necessitated special verification. These balances were usually kept in a wooden box, which would contain weights that corresponded to the coins of various territories or for gold. The tiny brass leaves allowed goods to be weighed in the smallest range and therefore made it possible to detect deviation from official standards.

Magnificent and Rare Set of French Goldsmiths or Moneyers Scales 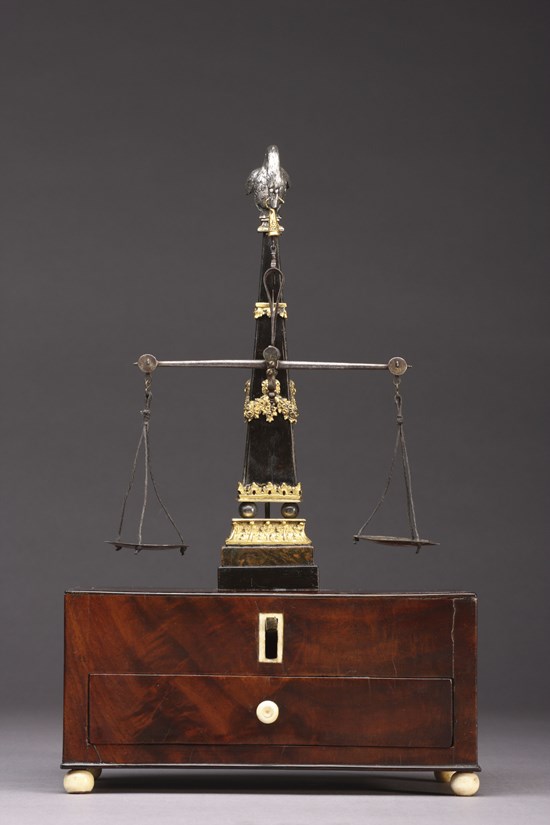 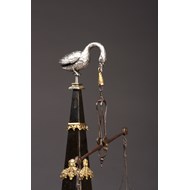 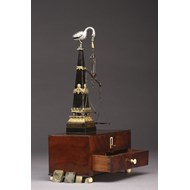