Ancient Greek Carved Marble Fragment of the Head of a Youth

Caption Literature
An Ancient Greek Carved Marble Fragment of the Head of a Youth
Probably the God Hermes, perhaps from a stele or votive relief
An old number ‘136’ to the base
4th Century B.C
Size: 16cm high, 14cm wide, 10cm deep – 6¼ ins high, 5½ ins wide, 4 ins deep
This marble fragment preserves part of a young male head of slightly under life size that illustrates well the idealised and classic qualities that characterise Greek art of the 4th century BC.
In Athens, Hermes had a very ancient cult and in the form of a herm he was present everywhere in the city, and because he was essentially kindly, he was one of the most familiar gods in the daily lives of the ancient Greeks. Hermes was the god of abundance, fertility, magic and prosperity; he was the patron of herdsmen and of the fruitfulness of herds and flocks. He is also the god who guides and shows transhumant shepherds the way. He guides people, especially travellers, for whom he marks out the route in the form of a pillar or herm. From the 4th century BC Hermes was also the god of athletes, a function linked to his youthful appearance and charm, which the god assumed for the purposes of seduction.
Of all the great historical movements, which have gone, to advance human civilization none has left a more brilliant record than that which gave us the arts, poetry, eloquence, drama and philosophy of ancient Greece.

Ancient Greek Carved Marble Fragment of the Head of a Youth 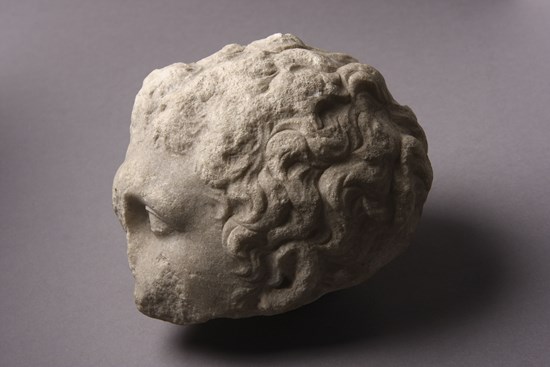