Caption Literature
A French Armillary Sphere used for measuring the co-ordinates of the Celestial Bodies
The Sun and Earth sphere surrounded by the solar planets, except for Neptune, which was later, discovered in 1846, and the moon all mounted on movable brass arms within a cage of rings representing the poles, tropics, ecliptic and equator. An outer central ring demonstrating the months of the year and their astrological signs
Printed and painted paper, brass rod and arms, ebonised wooden base
Circa 1830 – 40
Size: 46cm high, 28.5cm dia. – 18 ins high, 11¼ ins dia.
Probably developed during the 13th century armillary spheres are the oldest known type of astronomical instrument used for both observing the heavens and teaching. It is a skeletal celestial sphere with rings that reproduce the orbits of the heavenly bodies and can be set so that their relative positions reflect the relationships in the heavens. The arms and rings can be rotated to show the heavens at a particular time of day thus enabling predictions to be made by the astrologer.
Instruments of this kind were used from the time of the early Greek astronomers to that of Tycho Brahe (1546 – 1601) the Danish astronomer whose careful measurements of the sun’s apparent movement allowed him to determine the length of a year to within one second, forcing ten days to be dropped from the Julian calendar in 1582 after it was proved that the Julian year exceeded the ‘true’ year by that amount of time. Brahe became the Emperor Rudolph II’s personal astrologer, who eventually relied on Brahe not only for his predictions, but also for his advice on affairs of state. 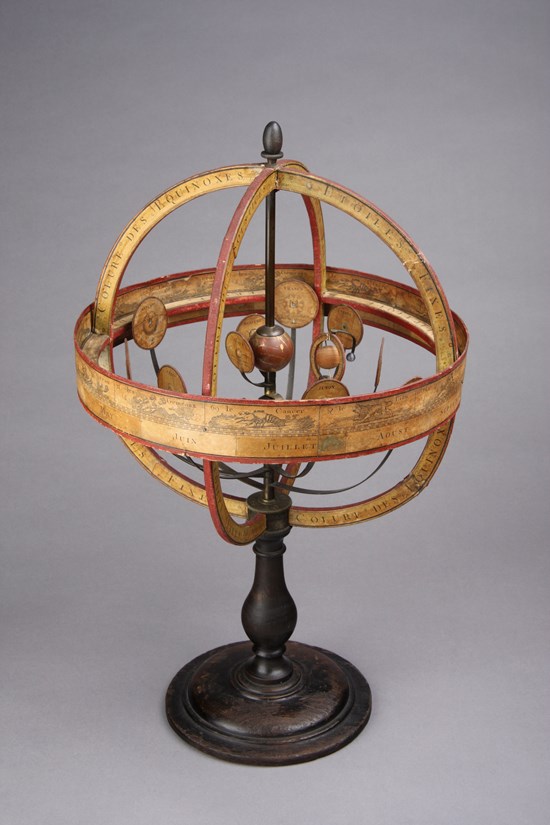