Caption Literature
A Victorian Cased Specimen of a Red Crested Cardinal ‘Fringilla Cardinalis’
A native of southern Brazil and Argentina this bird was introduced to Hawaii in the early 20th Century
Mid 19th Century
Size: 35cm high, 29.5cm wide, 9cm deep – 13¾ ins high, 11¾ ins wide, 3½ ins deep
Many of the birds indigenous to the Hawaiian forests produced feathers of spectacular beauty which can still be found fashioned into the many feather cloaks, lei, helmets and god figures that were made by people of Hawaii. Most of these birds had become specialised to living in the unique, undisturbed and protected old Hawaiian environment, but by the 20th century most were extinct.
The red crested cardinal was favoured for its cheerful song and bright red crest and is very similar to one described by Captain Clerke whilst on board the Beaglehole with Captain James Cooke: ‘the birds of these Islands (Hawaii) are as beautiful as any we have seen during the voyage; and are numerous though not various. There are few which seem to belong to the Trochili or Honey-suckers of Linnaeus, one of which is something larger than a bullfinch..... another is of an exceeding bright scarlet colour, the wings and tail black.....’ (Journals of Capt. James Cook page 602). 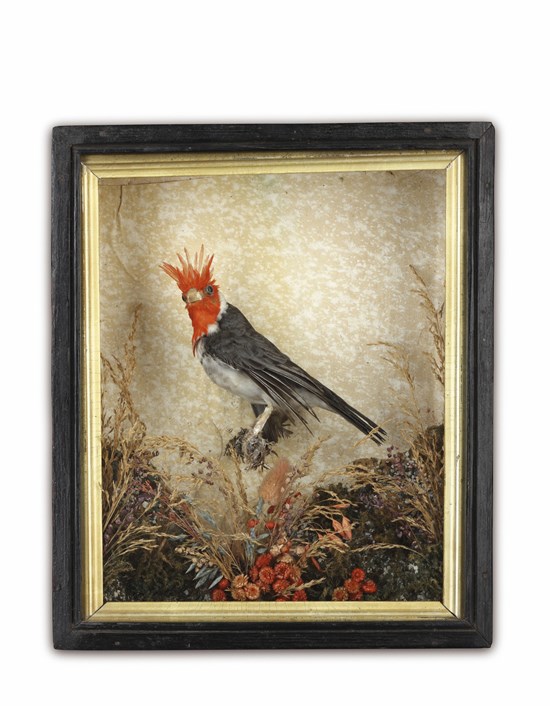 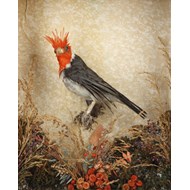