Caption Literature
A Fine and Rare Antique Arctic Narwhal Tusk
19th Century
Size: 132cm high (overall) - 52 inches high (overall)
The Danish King Frederick III who ruled from 1648 to 1670 possessed a tiny boat made of narwhal tusk, but believed to be of unicorn's horn and therefore able to detect the presence of poison. Made in the mid 1660's by Jacob Jensen Nordmand who relates in his autobiography: 'In August I made for His Majesty a boat of unicorn bound in gold. The anchor on it was also made of gold, the sails were of unicorn as thin as eggshell. It can float in a goblet of wine, following a magnet wherever one desires.' In the little boat's prow was set a piece of iron so that with a magnet one could draw the boat around the wine goblet. This magical miniature sailboat can still be seen in Rosenberg Castle in Copenhagen.
All narwhal tusks are left spiralled and sometimes, on very rare occasions, two tusk narwhals occur and are almost always female. However, in the 1960's off the coast of Greenland a narwhal was noticed with three tusks. It had two long and solid tusks which were the same in length and shape whilst the third was slim and located beside the left tooth. This unusual animal was seen on two successive days surrounded by several other protective males, and was so distinct that no doubt existed about the observation of its three spiralling tusks. 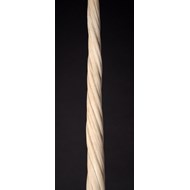 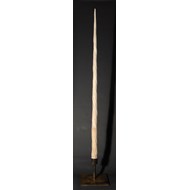 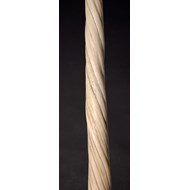