Caption Literature
Francisco de Goya (1746 – 1828) An Etching and Aquatint Entitled 'Caida de un picador de su Caballo Debajo del toro' 1816
From 'La tauro ma quia' plate 26, 2nd edition, 1855
Size: 28cm high, 38cm wide – 11 ins high, 15 ins wide
Francisco de Goya was a Spanish painter, printmaker and draughtsman, and became the most powerful and original European artist of his time. His artistic output was enormous, there are about 700 surviving paintings by him, some 300 prints and nearly 1000 drawings. He was exceptionally versatile and his work expresses a very wide range of emotion. His technical freedom and originality are also remarkable. In his prints he often used more than one technique on the same plate especially as here, combining etching with aquatint.
In his own day he was chiefly celebrated for his portraits, which account for more than half of his painted output, but his enormous reputation now rests equally on work that was virtually unknown to his contemporaries. The 'Disasters of War' etchings were not published until 1863 and his 'Black paintings' were not publicly exhibited until the 1870's. 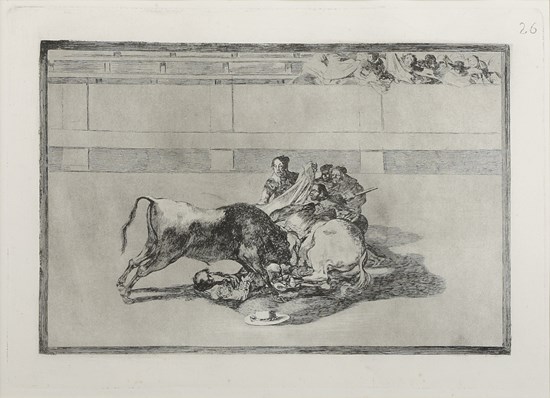