Caption Literature
A Low Countries Flemish Mother of Pearl and Brass Inlaid Wooden Casket from Spa The domed lid profusely decorated with flowerheads and parrots. The sides inlaid with floral motifs. The interior with original scarlet lacquering
Late 17th – Early 18th Century
Size: 13.5cm high, 35.5cm wide, 23cm deep – 5 ¼ ins high, 14 ins wide, 9 ins deep
Much like the English town of Bath, Spa in the Low Countries became a fashionable resort in the early 18th century for rich Europeans seeking relaxation and cures from the waters.
A pamphlet published in 1689 by the physician Edmond Nessel tells of the fine work produced in Spa with ivory, mother of pearl, tortoiseshell, pewter and copper inlay and refers to the 'Boulle' technique used in the workshops. Richly crafted boxes, caskets and lacquer and japanned wares were produced in Spa to satisfy the demand for fashionable souvenirs in the exotic and chinoiserie taste. During the town's high season around 500 craftsmen were kept busy producing a range of objects, from small snuff boxes to large caskets, some intricately inlaid as in this fine example, some decorated with gilt chinoiseries on a black background. 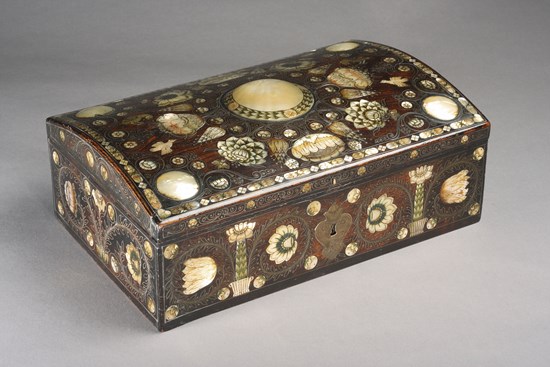 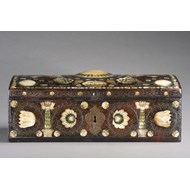 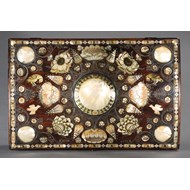 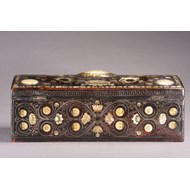 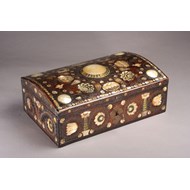 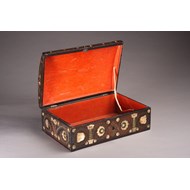 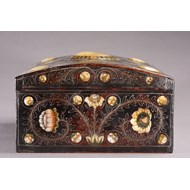 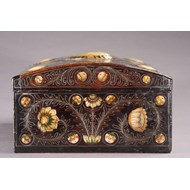