Caption Literature
A Fine Gillows of Lancaster and London Goncalo Alves Wood Pillar End Side Table
Impressed 'Gillows'. On original concealed sunk brass castors. The top a slab of rare Bohemian red Lithyalin glass made to resemble agate
Gillows mark for 1823 – 1830
Size: 75.5cm high, 46.5cm deep, 83.5cm wide – 29¾ ins high, 18¼ ins deep, 33 ins wide
A pillar and claw table was made by Gillows in 1821 for a marble slab obtained by Stephen Tempest as a souvenir of his family visit to Italy. The marble slab was rectangular in shape and a rosewood table with turned pillar ends was made to support the heavy marble at a cost of £54. Gillows therefore accepted commissions to make tables for these 'souvenir' tops obtained by gentlemen on the Grand Tour, and this rare red lithyalin glass slab was most probably also a memento for which Gillows were commissioned to provide a suitable base.
The table is veneered in richly figured Goncalo Alves, a Brazilian wood also known as Albuera or Zebra wood, which was used by the Lancaster firm from 1823 to around 1865 for a wide range of furniture. In 1833 Gillow & Co described Albuera as a 'fine dark wood' and it cost 40% more than mahogany, but was less expensive than rosewood. In 1848 the company called it 'Rio zebra wood' proving its Brazilian origins.
Lithyalin glass is opaque and was produced to imitate semi precious stones and agates, but showed a classical restraint of colour. It was invented by Friedrich Egermann in Northern Bohemia in 1828, but the technology was soon discovered by Count Buguoy who went on to specialise in producing glass 'agatines' in solid soft pastel colours. 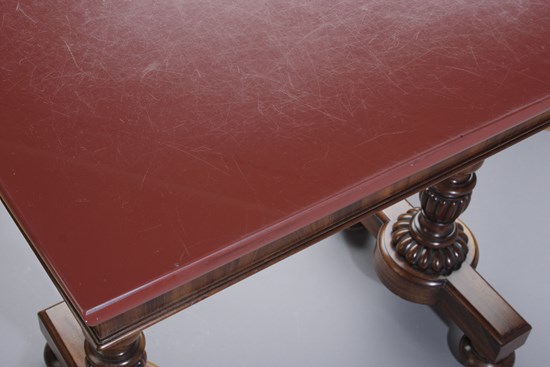 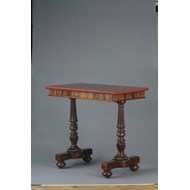 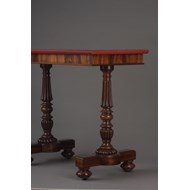 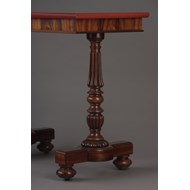