Caption Literature
A Magnificent Indian Sandalwood Rectangular Casket Finely Carved With Images of Hindu Deities within Scalloped Arches Amid Foliage
The raised central panel of the lid depicts Rama and Sita enthroned. The panels of the casket profusely decorated with animals, birds, deities and foliage, standing on four lion's paw feet
The inner lid carved with the inscription: 'Banvasi Gudigar Kristmappa & Co, 1897' and 'From Maharajah Benares', and with two armourials. The right hand coat of arms are those of the Maharajah and State of Benares. The left hand shield shows the arms of Freeman Thomas Earl of Willingdon 1866-1941 who became Viceroy and Governor General of India from 1931-36
Late 19th Century
Size: 29cm high, 45cm wide, 34cm deep – 11½ ins high, 17¾ ins wide, 13½ ins deep
A 'gudigar' was a hereditary artisan in the state of Mysore or Canara and they are believed to have originally come from Goa, migrating south in the early 16th century to avoid conversion to Christianity by the Portuguese. The origin of the word comes from the Sanskrit for carver (Kuttaka) and temple (Gudi) and was probably related to their Hindu castes' hereditary role as temple painters and carvers working in wood, ivory and stone.
It is not recorded when precisely carved sandalwood objects and furniture started to be made for colonial consumption. However, soon after the defeat of Tipusultan by the British in 1799, a travelling bed reputed to have belonged to Tipu was acquired by the 2nd Lady Clive in Mysore in August 1800, and can now be seen at Powis Castle. The sandalwood bed is carved with similar motifs and decorative elements, and to the same high standard of workmanship, as is found on later smaller works such as this casket.
A few examples of Mysore and Canara sandalwood carving were displayed in the Great Exhibition of 1851 and went on to be regularly shown at major international exhibitions, gaining the reputation of being the finest of all sandalwood carving in India.
Elaborate pieces intended for presentation such as this casket were commissioned from the gudigars and were often inscribed and signed. A large box could take between three and six months to manufacture and were often made from start to finish by one hand in a family workshop. 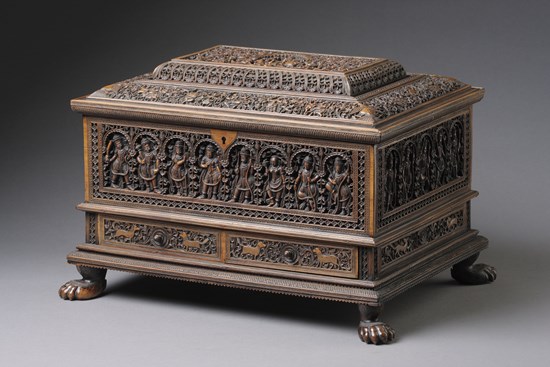 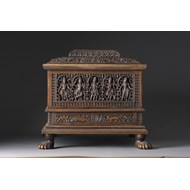 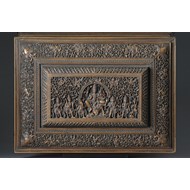 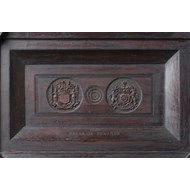 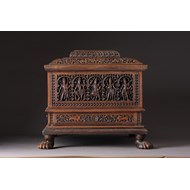 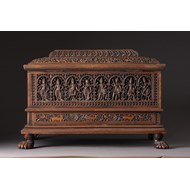 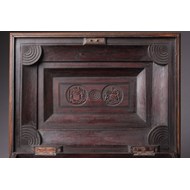 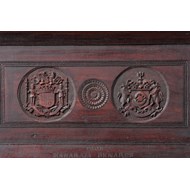