Caption Literature
A Collection of Eight Inuit Bering Sea Eskimo Walrus Ivory 'Iinrut' Amuletic Carvings
Consisting of three men, one dressed in a parka cap, and five arctic wolves
Late 19th Century
Sizes: 4cm high – 1½ ins high (max) – 3.5cm long – 1¼ ins long (min)
The Norwegian adventurer Johan Adrian Jacobsen collected some 36 of these small carvings in Alaska between 1882 and 1883 in the shape of fish, seals, walrus, bears, wolves, caribou, birds and foxes and commented that as with human figures most were made as toys for children and 'such carvings are made as a pastime in Winter, and in Summer when the ships arrived they are traded for some little thing'.
Eskimos have made carvings of small animals for thousands of years which show only minor changes in form through time. They are regarded as amuletic, called 'Iinrut', and kept for protection. Sometimes they were kept in special bags around the shaman's neck or tied hanging from his clothing. Although tiny they are always carefully carved and have a notable presence. 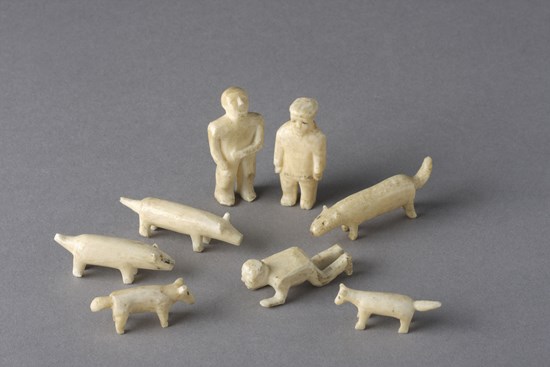