Caption Literature
A Rare and Superb Carved Wood Northwest Coast Tlingit Halibut Hook
A whale-bone barb bound with spruce root to the shaft. The front in the form of a killer whale, its body housing a raven, its tail decorated with a bears face, with spruce root binding the two halves
Late 18th Century
Size: 34cm long, 7cm wide, 13cm deep – 13½ ins long, 2¾ ins wide, 5 ins deep
Some of the worlds finest sculpture originated on the Northwest coast of America, that 1200 mile stretch of coastline studded with islands and inlets that extends from Puget Sound to beyond Yukatat Bay. Between the sound and the bay, out beyond the Islands and the Alaskan panhandle the Japan current flows in a southerly direction warming the land and encouraging the growth of tall timber, edible berries and fish. Waterways extend their fingers inland for miles and upon these inland strands there were excellent sites for Indian winter villages used for the ceremonial season when fishing grounds, established by right, were abandoned for the interval between salmon and halibut runs.
This super abundance of nature, which assured their basic livelihood led to the northwest coast tribes, in particular the northern ones like the Tlingit, Haida, and Tsimshian, to develop a system of social prestige. They developed a leisure class that had time to exclude mundane affairs and concentrate on social position and the attendant mythology and ceremonalism.
All Tlingit had access to rich halibut fishing grounds and these hooks were very effective as they would catch only a certain mid-size halibut leaving enough fish in the habitat to perpetuate the species. The carved images were added for their spiritual power to draw the halibut to the bait. This exceptionally well sculpted Tlingit halibut hook gains its mystic power by exploring the gap that exists between nature as seen and the tribal mythological past as can only be envisioned, and by conjuring up the forces of nature that cannot be seen. All of the animals, birds, and fish that the Northwest coast artists carved and created are compelling because in their creator's view they really do occupy a space in a world next to ours, under the sea, beneath a river or in a magic forest. 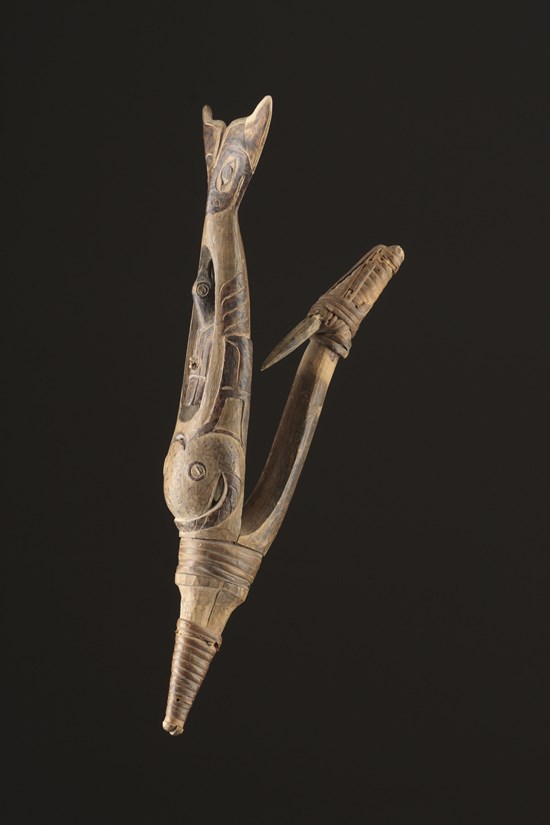 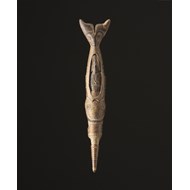 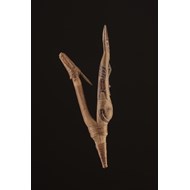