Caption Literature
A Victorian Specimen of a Mute White Swan 'Cynus Olor'
In original glass case
19th Century
Size: 98cm high, 118cm wide, 45cm deep – 38¾ ins high, 46½ ins wide, 17¾ ins deep
Swans are the largest of the waterfowl and among the most graceful. The mute swan is a pure white bird of the Northern Hemisphere, breeding in the north and migrating southward to slightly more temperate waters in the winter. Mating bonds are strong and permanent, and are formed and maintained by mutual displays.
According to medieval records the mute swan was domesticated in Britain prior to the 12th century. It was raised in captivity first for its meat and later for its great beauty. Swans were regarded as the property of the Crown and could not be bred or sold without a Royal licence. This law was strictly enforced by an appointed King's swan master and his deputies. 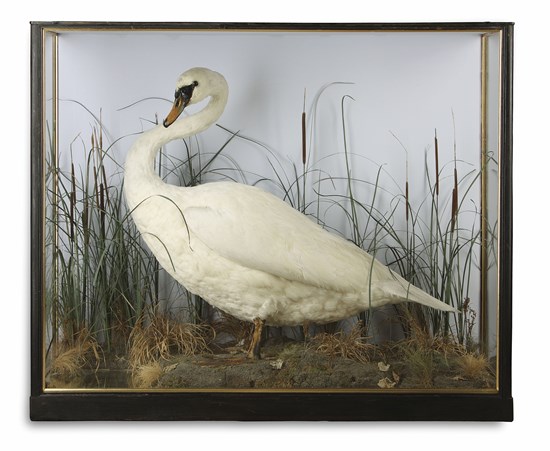