A Chinese Bronze of the Buddha Shakyamuni

Caption Literature
A Chinese Bronze of the Buddha Shakyamuni
His right hand raised in a gesture of 'Varada Mudra' religious discourse and argument.
Traces of paint and gilding, two of the five panels to his bejewelled crown damaged. A rectangular hole in his back once housing a reliquary
Ming Dynasty 16th Century
Size: 24cm high, 17cm wide, 12.5cm deep – 9½ ins high, 6¾ ins wide, 5 ins deep
Prior to the introduction of Buddhism the Chinese worshipped the spirits of ancestors and the recently deceased as well as nature spirits, folk deities and the gods and goddesses of popular immortality cults. The supreme power of Tian or heaven had no human form. Buddhism came to China from India and eventually provided a single all powerful, deity with a human form for people to worship. Acknowledging that life on earth meant suffering, Buddhism offered the emotional comfort of life after death in a Buddhist paradise.
During the Ming dynasty (1368-1644 AD) large numbers of bronze Buddhist images were made for devotional purposes in temples, household altars and monasteries of varying quality, and from very large to very small, the best being crisply cast and well finished. The decorated borders of this Buddha's robe have been painstakingly reproduced in the bronze. His face well modelled with a calm expression looking down through slender eyes, the pupils inlaid, his mouth half smiling, with two plaits of hair descending to each shoulder behind his elongated ears decorated with floral rings.

A Chinese Bronze of the Buddha Shakyamuni 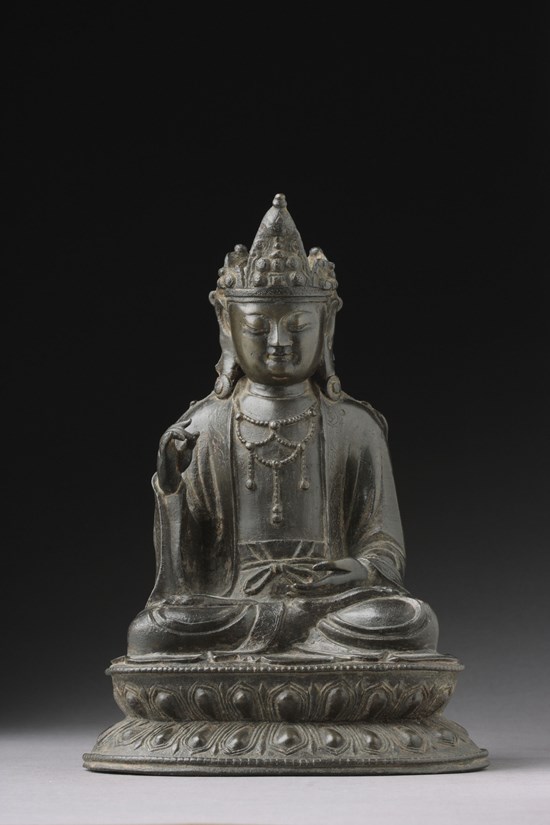 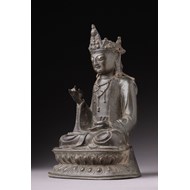