Caption Literature
A Fine and Unusual Pair of Scrimshaw Sperm Whale Teeth
The larger tooth engraved with the Scotsman, Tam o' Shanter dressed in tartan with his sword and shield, a pelican eating a fish, and a British ship sailing off the coast, a lighthouse in the distance
The second tooth depicting a Scottish woman holding a thistle, a palm tree and coconuts next to her and two harpoons with their lines. The reverse engraved with two whaling ships and a spouting whale being chased by two boats. Icebergs are shown in the distance
Smooth old white patina
Mid 19th Century
Sizes: 16cm long – 6¼ ins long (each) – 5.5cm wide – 2¼ ins wide (max)
Men aboard whaling ships were often at sea for years at a time. On a long, perhaps five year voyage, an older man who survived would return visibly greyer. Whalebone, baleen and the beautiful sperm whale teeth were all by products of whaling and were worked on board ship into a variety of shapes and designs. The teeth were often engraved with scenes and portraits that were inspired by or copied from a well known print. In order to combat the boredom caused by long periods of idleness every spare off duty hour was used by the scrimshander to polish, carve and engrave the ivory teeth of the whale he had helped to catch. 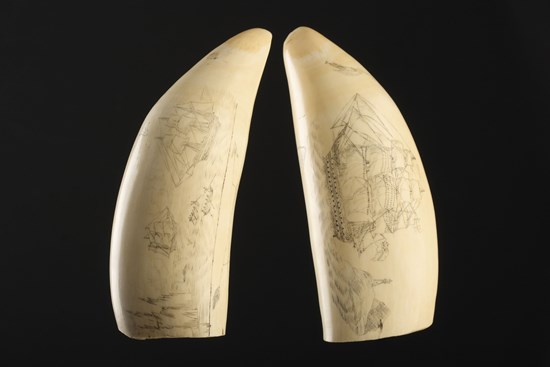 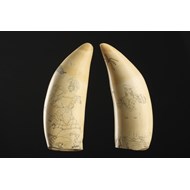