Caption Literature
An Interesting Small Scrimshaw Engraved Sperm Whale Tooth
Depicting a whaling ship with a humpback whale being harpooned from two boats. The reverse engraved with a proud sailor cheering and waving his hat. British or American
Aged smooth yellow patina, small chip to tip
Mid 19th Century
Size: 13cm long, 5.5cm wide (max) – 5 ins long, 2¼ ins wide (max)
Clifford Ashley in 'The Yankee Whaler' published in the 1930's, which has long been considered a definitive text, controversially called Scrimshaw '..... the only important indigenous folk art, except that of the Indians, we have ever had in America'.
However the first truly organised whaling industry seems to have originated with the Basques who were fishing the Bay of Biscay in 1000 AD. A small seal for a Basque town carved around 1400 AD shows a chase after whales from a small boat and is a remarkably scrimshaw-like object. Although it is most often associated with the Yankee whale-men of the 19th century the scrimshanders art was embraced and extensively practiced by the British, Australian and Portuguese mariners as well. 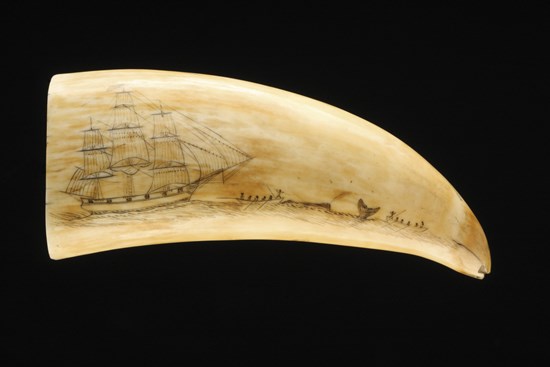 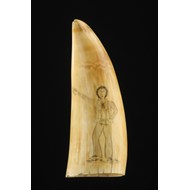