Caption Literature Exhibition
An Ancient Roman Fragment of Imperial Porphyry
Reputed to have been found at Ephesus. A typewritten label stating 'piece of porphrey. Bored and turned. ? part of a fountain. Found near Temple, Ephesus.1st Century BC.'
1st Century AD
Size: 6.5cm long, 5.5cm dia. – 2½ ins long, 2¼ ins dia.
The word Porphyry comes from the Latin 'Porpora' meaning purple and was first used to describe the famous Egyptian Imperial porphyry of which this is an example. It is a hard volcanic rock of a deep purple red colour with a peppering of tiny white crystals of feldspar and has been prized by Emperors, Kings and Popes since ancient times.
Virtually every piece of porphyry was quarried by convicts and slaves from the Egyptian eastern desert at Gebel Dokhan. The quarries became known as Mons Porphyrites and were opened in the early 1st century AD and worked until the 5th Century AD. They were most actively worked under the Roman Emperors Nero, Trajan and Hadrian. The Emperors reserved the colour purple for their own use and so porphyry and the Egyptian quarries became their exclusive Roman Imperial property.
We are always interested in purchasing any items of Porphyry from raw fragments to worked examples 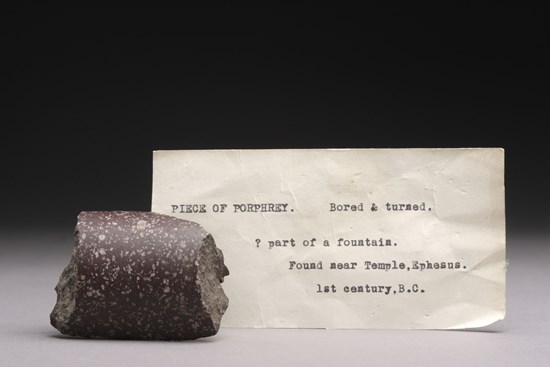