Caption Literature
A Large and Unusual Scottish Moss Agate and Silver Mounted Horn Table Snuff Mull
An engraved inscription around the rim reading: ‘The cheil wha winna sair his frien’ in a pinch, is na warth a snishen’, which translates as ‘He that is not a friend at a pinch is not worth a snuff’
Hallmarked London 1804
Size: 31.5cm long – 12½ ins long (approx)
These decorative horn snuff mulls were used ceremonially at the convivial dinners of Scottish regiments and societies and would be passed or slid along the table to each guest for them to partake.
The most notable Scottish female snuff taker was a Mrs Margaret Thompson who died in 1776 and whose devotion to snuff was made clear in her will. She directed that the bottom of her coffin be filled with unwashed handkerchiefs and a sufficient quantity of the best scotch snuff to cover her body. The six greatest snuff takers in the parish were to act as bearers and instead of black they were to wear snuff-coloured beaver hats. Snuff was to be strewn before the funeral procession and carried in boxes by her pallbearers for their refreshment as they went along. 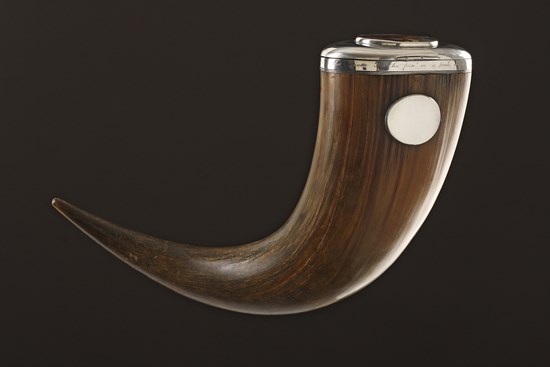