Caption Literature
A Rare German Turned Rhinoceros Horn Drinking Vessel
Made from the horn of a White African Rhinoceros
Late 17th – Early 18th Century
Size: 8.5cm high, 11cm dia. – 3¾ ins high, 4¼ ins dia.
The melancholic Emperor, Rudolf II (1552 – 1612) owned a total of thirteen rhinoceros horn vessels in his Prague ‘kunstkammer’. He believed them to have powerful amuletic properties, the magical ability to detect poison and the power to cure the princely melancholia.
As a sought after natural history curiosity, rhinoceros horn would have been purchased un-worked and un-set for a very high price as a rare artefact of an exotic land. A court artist would then be commissioned to carve, turn and create the natural horn into a miraculous artefact. ‘Mirabilia’ were just such unconventional objects that produced surprises through technical effect. These wondrous miracles of nature and art satisfy both curiosity and a thirst for knowledge: a need, which can still be identified today. 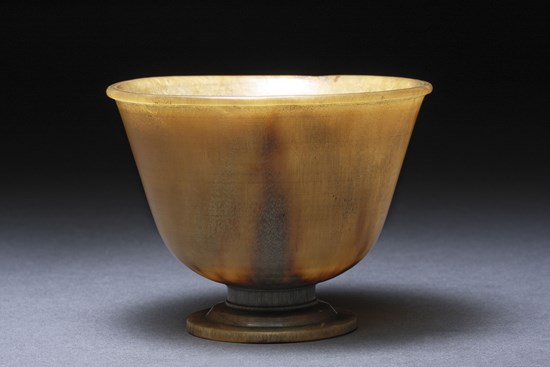