Caption Literature
A Fine Tibetan Human Bone Plaque from a Ritual Parure carved with an image of
Dí£kini, part of the raised leg now missing
Early 18th Century
Size: 11.5cm high, 2.5cm wide – 4½ ins high, 1 ins wide
Taken from the central point of a Buddhist Monk’s ceremonial apron used in a tantric ritual dance, this plaque represents Dí£kini the inner female representation of the energy of wisdom who is often portrayed dancing coupled with the manifestation of Vajra, the supreme power.
In Tibet, human bones are used for all kinds of implements and adornments. To the Buddhist time and death are not simply agents of final destruction, but represent the transformation, which the ending of one life brings as a prelude to the next. So the Buddhist confronts his natural fear and horror of death and comes to realise the illusory nature of ‘end’ as well as ‘beginning’ of both self and material things.
Tibetans use several methods of disposal for their dead, but as wood is very scarce they seldom cremate. The cut up remains are exposed on high open places to be consumed by scavenger hordes of beasts, vultures and crows. The bones are then collected and made into cups, drums, trumpets, necklaces and aprons. 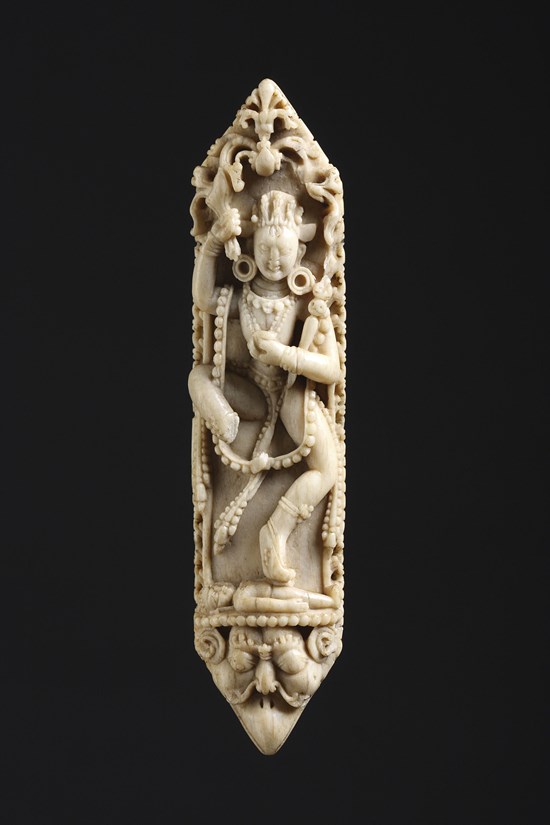