Caption Literature
A Fine Northeastern Woodlands Native American Maliseet or Micmac Maple Wood
Single Blade Canoe Paddle
Old smooth and dry patina – the letter ‘Y’ carved to one end
Circa 1840
Size: 203cm long – 80 ins long
Beautifully crafted from one piece of figured maple wood this paddle was made to be used with a birch bark canoe. It is generally considered that Micmac and Passamaquoddy birch bark canoes were the finest of all bark canoes and were built for use on both rivers and the ocean.
Elaborate trading systems existed in the eastern part of the continent ranging from the Micmac and Maliseet on the east coast to the land beyond the Great Lakes and from Hudson Bay to the Mississippi River. Archaeological evidence shows that articles made from obsidian such as tools were traded over great distances by canoe.
It is thought that the most important inventions of early North America and one that was unique to the continent was the bark canoe and it continued, unaltered except in size, to be the central element in the development of what is now Canada and the southern states of America. When the French arrived in the early 17th century they quickly adapted canoes to their own use and soon huge Montreal canoes laden with beaver pelts were being paddled by teams of voyagers across hundreds of miles bound for the European markets.
The high quality Maliseet and Micmac workmanship was noted early on by European observers and a good and well made paddle such as this fine example was essential for traveling at sea and on rivers, Summer and Winter. 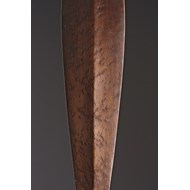 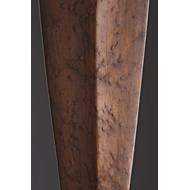 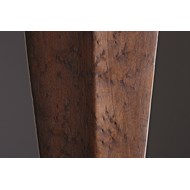