Caption Literature
A Fine Fijian Split Whale Tooth Necklace of Seventeen Points ‘Wasekaseka’
The Sennit now missing
Fine smooth creamy yellow patina
Circa 1820 – 50
Size: 10cm long – 4 ins long (longest tooth)
Reserved for those of chiefly status these necklaces were highly valued items of regalia on the islands of Fiji, and were often made by Tongan and Samoan craftsmen. William Mariner in 1817 noted that although the idea had come from Fiji for these ornamental necklaces of carved sperm whale ivory pieces shaped to curved points they were actually made in Tonga by specialists called ‘Tufunga Fono Lei’. He describes the necklace being made by cutting the whale tooth ‘into smaller pieces, each preserving the shape of the whale’s tooth, from an inch to four inches long, having a hole in the broadest part through this hole they are closely strung, and put around the neck, the largest being in front and the others decreasing in size on each side, up to the back of the neck; so that when drawn close, their pointed extremities spread out, and form a very agreeable ornament upon their brown skins, which is much prized by them, on account of its scarity as well as beauty’ (Mariner 1817 [1981]:179).
Evolved from the stubbier ‘Vuasagale’ necklace of complete teeth during the 1800’s many ‘sabre toothed’ necklaces of long split teeth were made and worn in Fiji, Tonga and Samoa as the precious whale teeth became more plentiful with the advent of European commercial whaling in the Pacific. 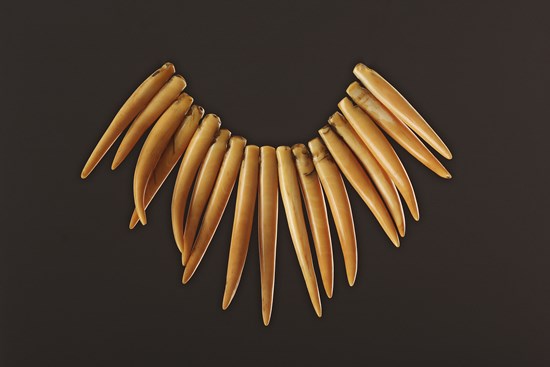