Caption Literature
An Interesting Scrimshaw Sperm Whale Tooth attributed to the ‘Naval Engagement
Engraver’
Engraved with six gun ships firing broadside at one another, the reverse with a whaling scene. American or English
Mid 19th Century
Size: 15.5cm long, 8cm wide, 5cm deep – 6¼ ins long, 3¼ ins wide, 2 ins deep
American scrimshaw artists used as a source of illustration for these scenes of naval engagement a profusely illustrated popular compendium of heroic Yankee naval battles from the war of 1812 called ‘Naval Monument’ by Abel Bowen that was published in several cheap editions between 1816 and 1837.
The depicting of a whaling scene to the reverse of the tooth is said to be typical of the ‘Naval Engagement engraver’ who was most probably British as some of the battleships presumed to be drawn by him fly the Union Jack. However, both American and British scrimshaw artists produced these scenes in the mid 19th Century and it remains undecided which nation of whaling seamen actually scrimshawed these scenes. 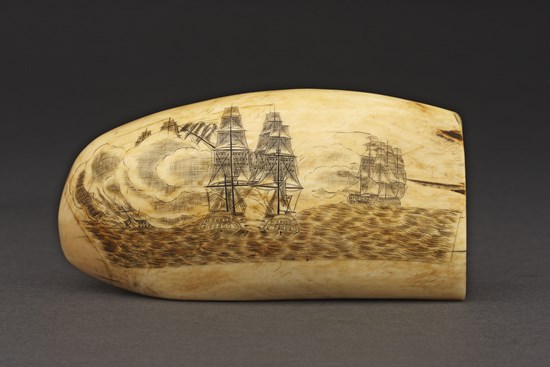 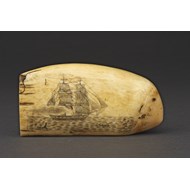