Caption Literature
An Ancient Romano-Egyptian Carved Limestone Priapic Figure
Traces of red pigment
Together with another holding a large phallus wrapped around his shoulder, worn surface
3rd - 1st Century BC
Sizes: 11.5cm long – 4½ ins long and 7.5cm high – 3 ins high
There still exists today the popular belief that the ‘fall of the Roman Empire’ was attributable to a great degree to sexual excess, but there is no good reason, academic or otherwise, to suppose that the Romans indulged in sexual excess compared with other peoples of antiquity or with ourselves. They were merely less reticent than some in talking about and depicting sexual matters.
Figures of this type have been found at Pompeii and probably represent Priapus, a deity who was always phallic. An early fertility god, his particular responsibility was with gardens and farms. The phallus was not just an erotic device; it was also regarded as having a protective and apotropaic function. 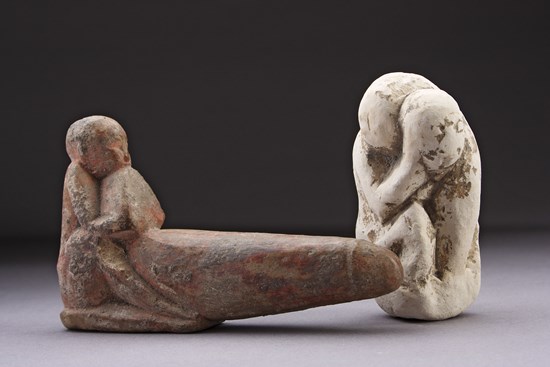 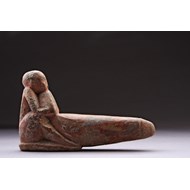