Specimen of Copal, Fossil Resin, containing a swarm of tiny flies and other insect

Caption Literature
A Specimen of Copal, Fossil Resin, containing a swarm of tiny flies and other insect
inclusions. An old label reading ‘Copal from Zanzibar. Presented by D M Reid, esq’
20 – 30’000 years old
Size: 6.5cm high, 9cm wide, 7.5cm deep – 2½ ins high, 3½ ins wide, 3 ins deep
Many old master paintings were originally varnished with lacquers produced from ground copal and amber. Copal is a sub-fossil resin of several thousand years old. Amber is several million years old. Put close to a flame amber will soften and blacken whereas copal will melt and liquefy.
The oldest copal deposit from Mizunami in Japan is approximately 33’000 years old and was formed by tropical legume trees. Most copal occurs in the tropics often in very wet temperate areas where the tree species are still extant, such as East and Western Africa, the Dominican Republic, and South America where the Araucarians, a genus of conifer trees is indigenous. On the North Island of New Zealand copal is obtained from huge Kauri trees. The resin oozes from under the bark and accumulates on the forest floor. Buried for thousands of years by needles and twigs the subterranean kauri gum is sometimes found where kauri forests no longer exist.

Specimen of Copal, Fossil Resin, containing a swarm of tiny flies and other insect 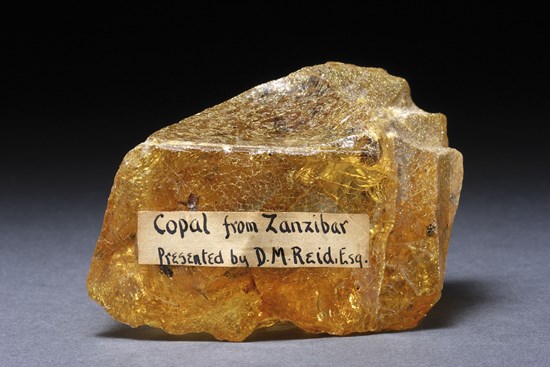