Caption Literature
A West African Benin Carved Coconut Container
Depicting a European with his head severed from his body grasping a snake and a book, a padlock above his head. The Oba dressed in ceremonial attire with his sword and sceptre, with a priest holding a lance. The stopper and chain attachment missing
Early 19th Century
Size: 11.5cm high, 9cm wide – 4½ ins high, 3½ ins wide
Apart from the numerous carved Benin ivories that have survived, wood and other carvings also exist that were made by the Omada or Court pages who belonged to the personal servants of the Oba. The Omada held the office of a page for a period of 6 to 20 years. Their most important function being that of carrying the stately sword ‘ada’ during the public appearances of the Oba.
The Omada were allowed to learn the craft of carving and exceptionally gifted craftsmen where often taken under the Oba’s personal care once they had left their official position. Europeans were favourite motifs on Omada carvings in wood and coconut, and the foreigners frequently bought the works of art on which they were depicted. 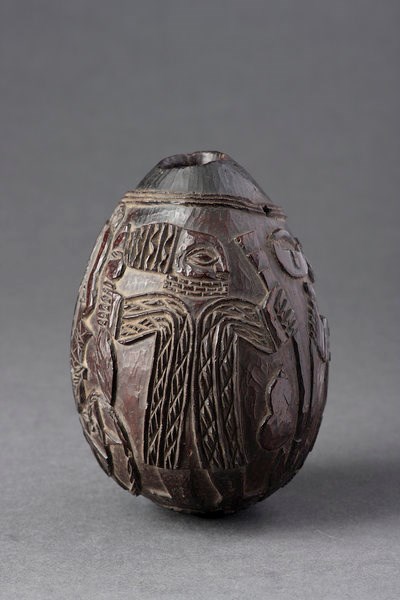 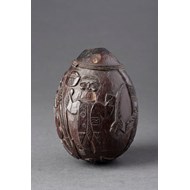 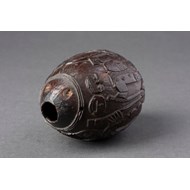