Caption Literature
An Australian Aboriginal Western Desert Shield ‘Wunda’
Aged smooth patina, especially to the handle on reverse. An old and nibbled edge to the bottom
Wood, white clay and red ochre
19th Century
Size: 86cm long, 16cm wide – 33¾ ins long, 6¼ ins wide
In 1791 George Vancouver, Commander of HMS Discovery landed in Western Australia and named the area King George’s Sound, but it was not until 1826 that the Government of New South Wales established a small settlement there. The Aboriginal people of the area were trading artefacts with Europeans from the early 19th century, with many of these being made specifically for trade. These artefacts consisted mostly of hammers, hand clubs, spears and taap knives which required little effort to make and would be readily offered for barter. In December 1821 the ship Mermaid spent several days at Kings Georges Sound and Philip Parker King noted that the value of each artefact offered for trade ranged from half to one eighth of a ships biscuit.
However, shields were not so easily obtained as they took many hours to make and were held sacred and in high regard by the Aboriginals. This shield shows signs of great age and originates from the Murchison district and southwest region of Western Australia. 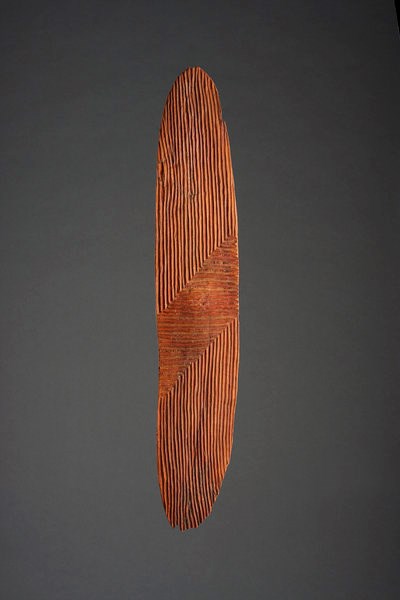