A Rare Portrait of a Native American Blackfoot Chief

Caption Literature
A Rare Portrait of a Native American Blackfoot Chief Wearing an Eagle Feather War
Bonnet over his long hair
Oil on canvas.
The canvas stamped to the reverse ‘Wolfson Queen St. C. Toronto’
Circa 1840 – 1850
Size: 59cm high, 44cm wide – 23¼ ins high, 17¼ ins wide
When the American artist George Catlin set up his easel amid the Blackfeet warriors in 1832 he found a vigorous people with a way of life that was at its cultural zenith. He estimated the confederacy’s population at 16’500. The German explorer Prince Maximilian zu Wied and the Swiss artist Karl Bodmer, visiting a year later put the population closer to twenty thousand. Catlin called the Blackfeet ‘the most powerful tribe of Indians on the continent’ but by 1837 a smallpox pandemic had scourged the upper Missouri river homelands and the tribe was decimated. Its survival and recovery speak of an enduring people.
Catlin was a Philadelphia portraitist with a desire to portray ‘man in the simplicity and loftiness of his nature’. He followed the Lewis and Clark trail for 2000 miles up the Missouri river and produced 135 paintings along the way. The Sioux, amazed by his ability to capture the likeness of a human on canvas hailed him as a powerful medicine man.
It is to George Catlin and Karl Bodmer that credit must be given for ‘establishing the Plains Indian as the typical American Indian in the minds of millions’. (John C Ewers).

A Rare Portrait of a Native American Blackfoot Chief 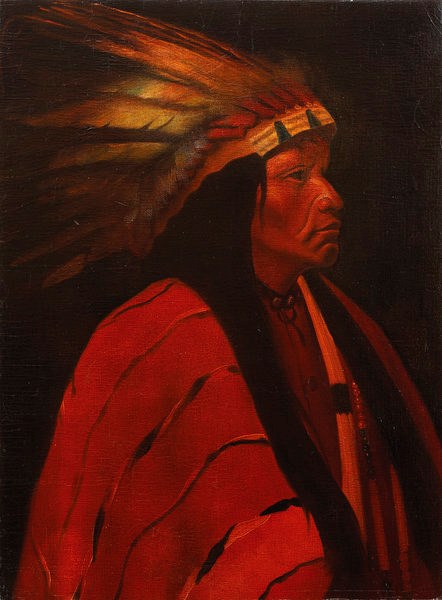