Caption Literature
A Celtic Votive Head of a Man, Probably British
Limestone blackened by exposure. With inventory no. ‘M 548’ to the top of the head
2nd – 3rd century AD
Size: 22.5cm high, 14cm wide, 22cm deep – 8½ ins high, 5½ ins wide, 8¾ ins deep
The austere and abstract aesthetic portrayed by these ancient Celtic heads is both powerful and disconcerting. The minimal carving and the reduction of the heads features to essentially geometric forms shown in the expressionless lentoid eyes and schematically suggested hair give the figure a sense and feeling of modernism.
The head may well represent a local deity and was probably intended for ritualistic purposes as part of the Celtic cult of the head. The classical authors Diodorus Siculus, Strabo and Livy recorded how Celtic chiefs prized trophy heads of their enemies and displayed them in a temple within their camps, and as cult objects the stone heads possibly functioned as surrogates for actual decapitated human heads taken in battle.
The veneration of the human head was rooted in the Celtic religious system, which regarded the head both as the seat of soul and as capable of independent being. Its inherent powers could protect against evil and were a source of magical power and protection. The Celtic reverence for the head laid the foundation for the Christian view of the head as the locus of the soul which is the reason why the heads of Christian Saints were often preserved as sacred relics. 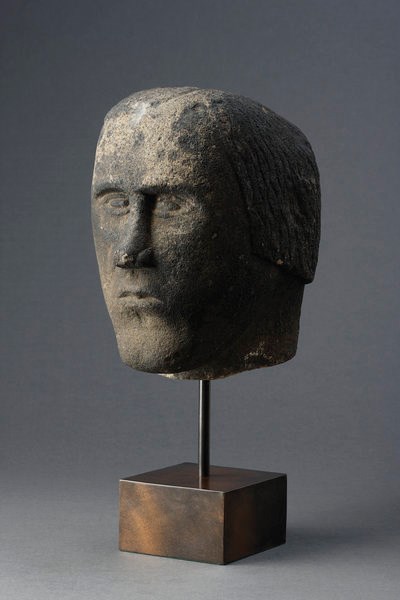