Caption Literature
An Interesting Pair of Pearl Oyster Shells ‘Pinctada Martensi’
Finely engraved with scenes of grizzly bear hunting in the Canadian wilderness
Circa 1860
Size: 20cm high, 17cm wide – 8 ins high, 6¾ ins wide
The engravers of plaques for gunstocks who worked in the arms industries were craftsmen trained in the relevant techniques that could easily be transferred to mother of pearl. Makers of ornaments for the butts of muskets, rifles and pistols were long accustomed to the craft of cutting out inlays of mother of pearl which were decorated by black line engravings before being let into the wooden stocks. It is therefore most probable that one of these arms engravers using prints as his source etched these plaques. The engraved lines were cut with the same tool, a mushroom handled graver, which cut lines in a copper plate and the lines darkened with powdered charcoal mixed with wax or oil.
In many cultures, including that of the Native Americans, bears have been the subject of myths and cults and they were often regarded in the northern hemisphere as the ‘King of the Animals’ because of their size and strength. Bears walk on the soles of their feet and are omnivorous although plant material features more than animals in their diet, with the one exception of the Polar Bear, which is purely carnivorous. Stone age paintings and bone fragments found in caves indicate that our prehistoric ancestors hunted bears. 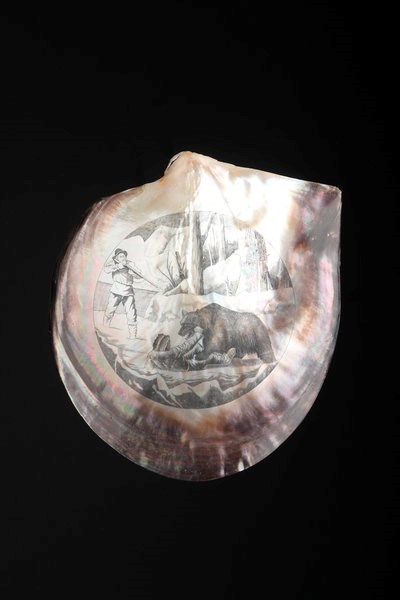 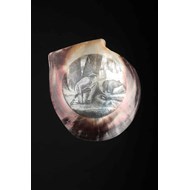