Caption Literature
A Fine Anglo Indian Raj Miniature Oil Painting on Ivory
Depicting the three children of Sir John and Lady Login with their ayah and Indian playmate. Their toys on the carpet, a mountainous view beyond through the window
Inscribed to the reverse:
‘Edward William Spencer Login b 1843’
‘Lena Margaret Cambell Login b 1845’
‘Louisa Marion d’Arcy Login b 1846’
‘Painted by an Indian Artist’
Circa 1847 – 1848
Size: 9.5cm high, 13cm wide – 3¾ ins high, 5 ins wide
Sir John Spencer Login (1809 – 1863) departed from Edinburgh for India in 1831 to work as a surgeon. In 1842 he married Lena Campbell and they had seven children. Louisa Marion d’Arcy who is the baby in the portrait miniature, was born at Lucknow in West Bengal and it is very probable that the miniature was painted in this area of India.
By 1849 Sir John Login had been appointed the guardian of the Maharaja Duleep Singh. He was well known for his devout Christianity, his impeccable honesty and his diplomatic talents, and so when the British annexed the Punjab and deposed the 11 year old Maharajah they appointed Dr John Login ‘Governor of the Citadel of Lahore and all it contains.’ This included the jewel house, which contained the Koh-i-Noor diamond, all military stores, the court establishments of all the Maharajahs of Lahore including 6 sets of courtesans, five full bands of musicians, 33 Ranees and 130 Concubines!. To add to this proof of their faith in his abilities he was also made Postmaster General of the Punjab.
He formed a deep and lasting bond with Duleep Singh who was deprived of his wealth, kingdom and religion. Duleep Singh was the Maharajah of Lahore and King of the Sikh empire, but later in Scotland wearing tartan kilts and hunting grouse he became known as the ‘Black Prince of Perthshire.’
The Logins took, following the conversion of the Maharajah to Chrisitianity, Duleep Singh to England in 1854 where he remained in exile for most of his life. Queen Victoria took a great interest in him and ordered a full length portrait by Franz Xaver Winterhalter for which Duleep Singh accompanied by Mrs Login went to Buckingham Palace twice a week for sittings. According to Lady Login in her book ‘Lady Login’s Recollections’ Winterhalter gave Duleep Singh, still short of his 16th birthday, the height he assumed he would eventually attain, although he apparently grew no taller. This now famous portrait painting is still in the collection of HM The Queen.
In the same year Queen Victoria Knighted Login for his services to the Empire. In January 1858 his official guardianship of the Maharajah came to an end although he continued to advise him and look after his interests. Sir John Login died in 1863 after a sudden illness. The Login family grave is in Old Felixstowe on the Suffolk coast with a monument erected by Duleep Singh in memory of his guardian. 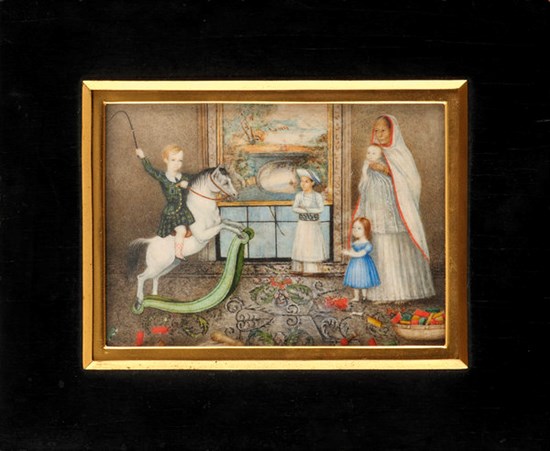