Caption Literature
A Fine Russian Tula Armouries Miniature Steel and Wood Working Model of a Rifle
Contained with its bayonet in a velvet and silk lined, silver mounted ebony box
An oval silver plaque to the lid with an inscription reading: ‘Mr A D Langhaus to Messrs. Firth and Sons, Tula 1874’
Circa 1874
Size: 16.5cm long – 6½ ins long (gun)
20cm wide, 6.5cm deep, 3.5cm high – 8 ins wide, 2½ ins deep, 1½ ins high (case)
Tula is a region of Russia in the Srednerussky Hills to the south of Moscow. The capital town of Tula has been famous for the remarkable metal work it produces since the construction of the armoury by Peter the Great in 1712. By 1720 the factory had produced 22,000 reliable light infantry and dragoon guns and flint lock pistols. By 1749 the armoury was also producing steel sabres, swords and broadswords and by 1762 almost half of the population of the city were state gun makers, armoury craftsmen, or arms merchants.
In the second half of the 18th century an original technique was developed of diamond cutting the steel and the artistically decorated Tula arms and other works of art began to be in great demand. The mastery of the Tula armourers and craftsmen was unrivalled throughout Europe. At the end of the 18th century Tula possessed many remarkable gunsmiths and one, Ivan Polin, designed one of the first models of a multi-charge repeating firearm. During the 19th century the armoury remained one of the very best in Europe and in 1879 the Berdan rifle with an improved sliding bolt was put into mass production.
During the last quarter of the 19th century the factory had a dedicated model shop specializing in the development of miniature scale models of its own small arms and hunting guns. These fine miniature firearms are exact replicas of the larger gun, each part working and of steel cast in Tula. 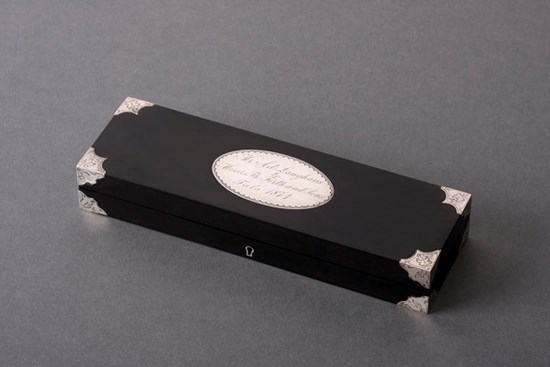 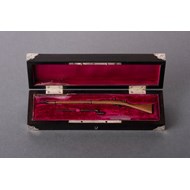 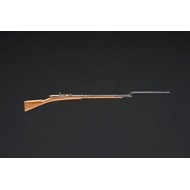