Caption Literature
A Collection of Ten Italian Neapolitan Crí¨che or Presepio Figures
Complete with their original costumes. Painted and modelled terracotta, carved wood, cotton, cloth, silk, lace, gold and silver thread
Late 18th – Early 19th Century
Size: 30cm – 33cm high – 12 – 13 ins high (approx. each)
Christmas crí¨che scenes were very popular in 18th century Naples where the largest school of Italian presepio modellers was centered. Each year nativity tableaux were set out in the churches, often with elaborate and costly settings, theatrically staged around the puppet like figures. The quality of the workmanship of these figures together with the magnificence of their fine costumes is exceptional.
The Royal Bourbon court of King Charles III of Naples employed famous artists to create fine figures for use in the palace nativity scenes. However they were not just confined to churches, and the Royal court, they were also used in domestic interiors where whole crí¨che scenes were put into especially painted sets which often included the volcano Vesuvius smoking in the background.
One artist employed by the King was called Sammartino and was noted for his vigorous modelling. His pupil Guiseppe Gori seems to have made a living by creating crí¨che figures. Sometimes Gori would use the likenesses of his friends and patrons for the faces of his life like figures. 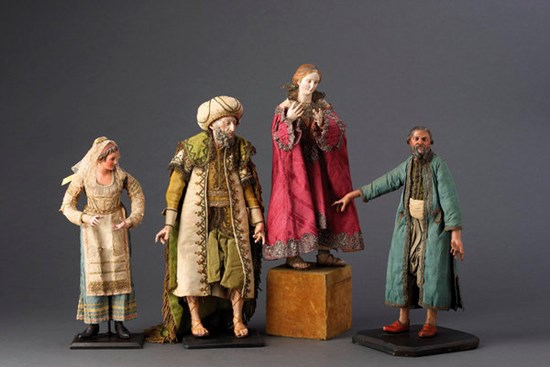 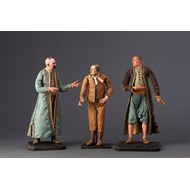 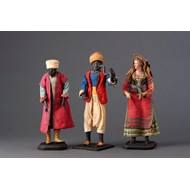