Caption Literature
A South American Amazonian Shamans ceremonial body ornament made of bird
wing bones probably from a harpy eagle or king vulture, and the amuletic skulls of two parakeets and another bird skull
19th Century
Size: 30cm long – 12 ins long (approx.)
Amongst the Amazonian Indians, natural objects are infused with the ideology of animism, as they believe in the total spirituality of the universe. All lowland South American Indian cultures maintain that everything that grows, moves or develops must like humans have a soul, this belief engenders a very different attitude towards nature from the West’s fixation on control and domination. In the jungle a prayer of forgiveness is uttered when an animal like an eagle is captured to yield its down and feathers for a headdress, and it is often only caged and not killed as the men wait for the bird to moult. Only that which is needed is killed otherwise the animal spirits will become angry and no longer let their children be taken by ungrateful hunters. 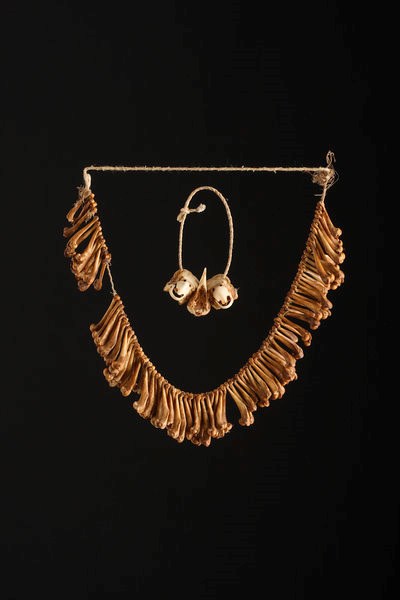