A Fine Grand Tour Bronze of the Spinario

Caption Literature
A Fine Grand Tour Bronze of the Spinario or Thorn Puller after the antique
On a green veined marble base
Early 19th Century
Size: 24cm high – 9½ ins high
Tobias Smollett (1721-71) in his ‘Travels Through France and Italy’ had words of warning for young Grand Tourers: ‘Our young gentlemen who go to Rome, will do well to be upon their guard against a set of sharpers who deal in pictures and antiques, and very often impose upon the uninformed stranger, by selling him trash, as the productions of the most celebrated artists. The English are more than any other foreigners exposed to this imposition. They are supposed to have money to throw away â€¦.. but what is still more dangerous, the moment they set foot in Italy, they are seized with the ambition of â€¦.. becoming connoisseurs in painting, musick, statuary and architecture and the adventurers of this country do not fail to flatter this weakness for their own advantage â€¦..’
The original ancient bronze of the Spinario is in the Capitoline Museum in Rome. It is made up of Greek fragments of the 4th or 5th centuries BC which it is thought were assembled during the Roman Empire.

A Fine Grand Tour Bronze of the Spinario 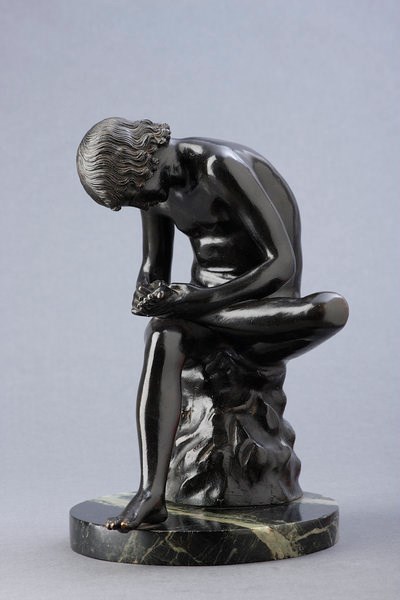