A Ceremonial Kris with an Iron Seven Curved Blade

Caption Literature
A Ceremonial Kris with an Iron Seven Curved Blade
With gold damascening and ‘pamor’ pattering. The carved handle depicting the Wayang God Bima showing his large curved thumbnail
Central Javanese or Cirebon
Iron, nickel pamoor, gold, silver and elephant ivory
Mid 19th Century
Size: 42.5cm long – 16¾ ins long
In Indonesia it is only the ‘Empir’ or Kris smith who is endowed with enough spiritual power to forge the iron and the nickel iron with the help of the mysterious element of fire without being endangered. He is able to forge the metal into a weapon with the un-missable magically potent ‘pamor’ pattern on the blade that is imbued with auspicious power for its eventual owner. The forging of a proper Kris is a sacred act accompanied by a long process of fasting, meditating, prayer and the making of offerings, as well as the calculation of auspicious and inauspicious days for the carrying out of the work. There are two forms of blade; the straight blade ‘leres’ and the wavy form ‘luk’ in which the blade always has an uneven number of curves varying from 3 to 13.

A Ceremonial Kris with an Iron Seven Curved Blade 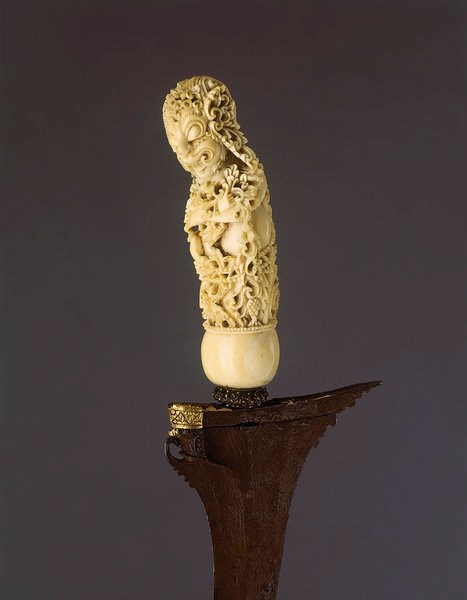 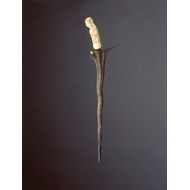 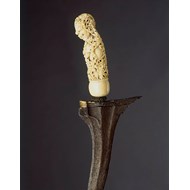