Caption Literature
A Rare and Unusual Tongan Headrest ‘Kali Kofe’
Made from an old transverse bamboo nose flute ‘Fangufangu’ decorated with incised printing and pictorial designs, original plaited coir sinnet binding tied around the wooden legs. Old dry crusty patina
Early 19th Century
Size: 66cm wide – 26 ins wide
In Polynesia, headrests are closely associated with that most sacred part of the body, the residence of a man’s ‘mana’, and on the island of Tonga it is regarded as an insult to touch a ‘kali’ without the owner’s prior permission. Sometimes these longer ‘communal’ headrests known as ‘kali kofe’ were taken and used by a chief and members of his group when visiting another village.
This interesting headrest has been made from an old Tongan musical instrument called a ‘Fangufangu’, which is a tranverse bamboo nose flute used traditionally to awaken high chiefs. The flute has five holes drilled at intervals in a line on one side of the segment, the middle hole continuing right through to the other side of the bamboo. It is these holes that produce the ‘Fangufangu’ musical scales. Headrests have been found on both Tonga and Fiji with bars made from the shafts of old war clubs so it is possible that valued and prized heirlooms were reused to provide ancestral headrests. 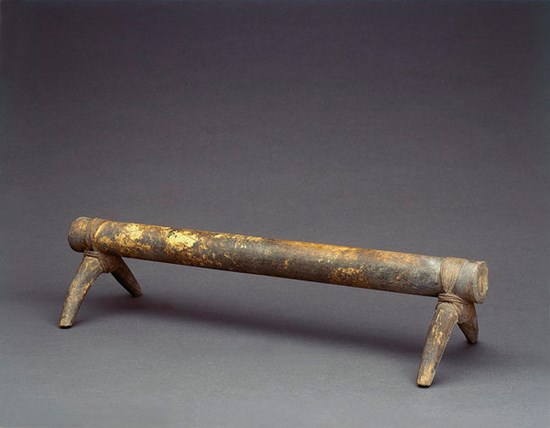