Caption Literature
A Collection of Eight Polynesian Topographical Watercolour Drawings
All on ‘Whatman’ wove paper with watermarks for 1822, 1823 and 1829
Pencil, ink and watercolour
Circa 1830
Inscribed in ink:
A ‘Landing Place at the Pellau Islands’
B – (ink very faded)
C ‘Malhoai Bay Otaheite. From one of the hills’
D ‘The Island of Utrik (?) belonging to the group of â€¦.. in the Ratak chain Marshal Islands’
E ‘Otaheite bearing S.E distant 1 league’
F ‘Raiatea’
G ‘Eastern point of the harbour Huahine’
H ‘â€¦â€¦â€¦â€¦â€¦â€¦. Otaheite â€¦â€¦â€¦â€¦..’
Size: approx: 32cm high, 40cm wide – 12½ ins high, 15¾ ins wide
The Pacific became, after discovery by Cook, and has in many respects remained a symbol of exotic difference. It was William Hodges whilst with Captain Cook on his second voyage who first provided Europeans with images ‘drawn from nature’ of the Islands of the South Seas and their native peoples. Many of these images drawn by the explorers and voyagers of the late 18th century seemed to encapsulate the collision between Pacific so called ‘savage’ and European or ‘civilised’ cultures, but the beauty of the Islands scenery and the favourable climate overcame European concerns and the Islands of the Pacific, especially Tahiti, were continuously visited throughout the 19th century. 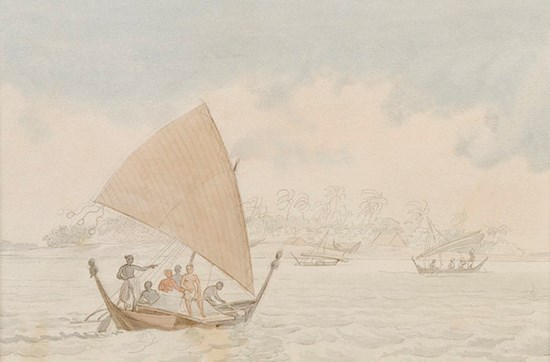 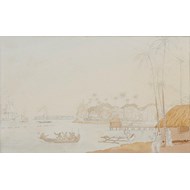 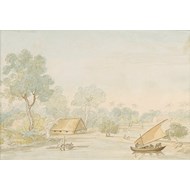 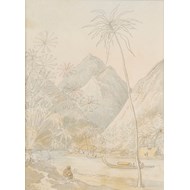 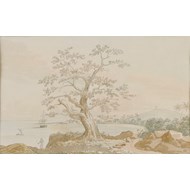 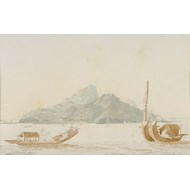 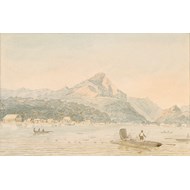 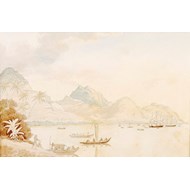